South has been given more prominence; the team also has more youngsters 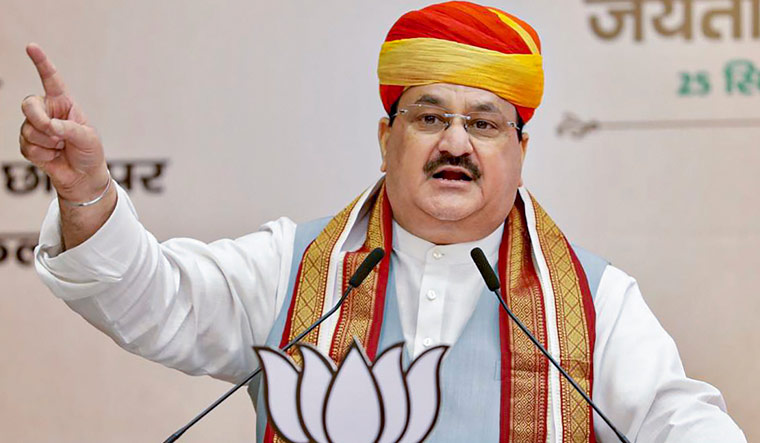 BJP chief Jagat Prakash Nadda, nearly nine months after he was formally elected as the party president, reconstituted his team of party office bearers, including many new faces, giving representation to most states, especially the south, while dropping many veterans.

By bringing in more leaders from the south like D. Purandeswari, C.T. Ravi (general secretaries), A. P. Abdullakutty and D.K. Aruna (vice presidents), Tejasvi Surya (youth wing chief), Dr K. Laxman (OBC wing president) and Tom Vadakkan (spokesperson), the saffron party has given an indication about the region it wants to focus on for greater electoral representation. The party has also inducted leaders from states that are going to elections soon—West Bengal, Assam and Kerala.

The party almost doubled the number of its national spokespersons to further its reach in the media.

Nadda has retained Anil Baluni as national spokesperson and media cell in-charge, apart from Amit Malviya as the IT cell in-charge.

This was the most awaited list ever since BJP assumed power in 2014. Former BJP chief Amit Shah was expected to make the changes when he became president, but he did not bring about an drastic change. With these new appointments, the party is perhaps witnessing a generational change.

The party, for the first time since 2014, officially named former Uttar Pradesh minister Rajesh Agarwal as its treasurer and Madhya Pradesh MP Sudhir Gupta as the co-treasurer.

In fact, more than the inclusion of new members, it was the names of powerful veterans who were dropped from the team that came in as a surprise.

General secretaries who have been dropped are Ram Madhav, Murlidhar Rao, Saroj Pande and Anil Jain. Dushyant Kumar Gautam, the dalit face in the party who was earlier a vice-president, has been made a general secretary. Purandeswari, former MoS in the UPA government and daughter of former Andhra Pradesh chief minister N.T. Rama Rao, and C.T Ravi, Chikkamagaluru MLA and a minister in the Karnataka government, have been made general secretaries apart from Dilip Saikia, an MP from Assam, and Punjab BJP leader Tarun Chugh (Punjab). It is a promotion for Chugh as he was earlier a secretary in the team.

General secretaries who have been retained are Bhupender Yadav, Arun Singh and Kailash Vijayvargiya.

Former Left leader from Kerala, Abdullakutty who switched over to the party from the Congress, has been elevated as national vice-president, even as Kerala is set to go to polls in 2021.

This is also the first time in recent years that the party has four Muslim office bearers. The party has Shahnawaz Hussain and Zafar Iqbal as the national spokespersons.

The general secretary organisation, B.L. Santosh, and three joint secretaries, organisation. – V Satish, Sudan Singh, and Shiv Prakash— have been retained. These are RSS pracharaks who work with the BJP as the link with its ideological fountainhead.