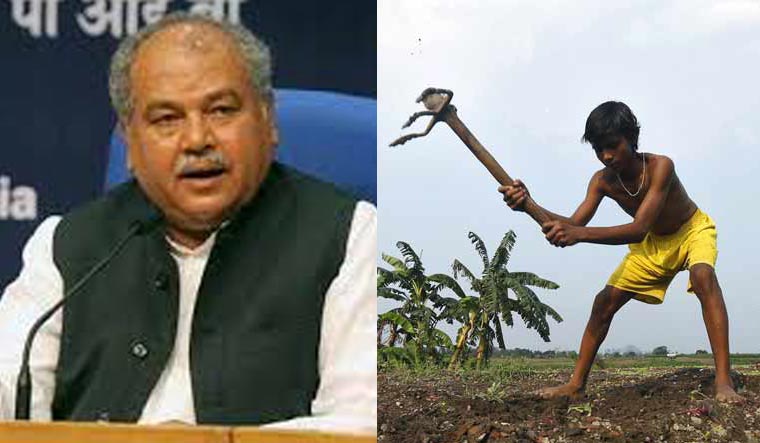 Union Minister for Agriculture and Farmers' Welfare Narendra Singh Tomar has been in the firing line for over a week.

Farmers' groups in multiple states and opposition parties have been protesting against three bills framed by the Narendra Modi government to deregulate the agriculture sector.

News agency ANI aired an interview it conducted with Tomar on Thursday morning, in which he accused the opposition of hypocrisy over the farm bills.

Tomar rejected the opposition's contention that the Modi government intended to shut down APMCs. "APMCs are run by state governments; our bill cannot shut it down and we don’t even intend to do so. Our law says that trade area outside APMC mandis will be free from tax. Farmers will have the freedom to choose where they want to sell," Tomar told ANI.

Tomar pulled up both the Congress and Punjab Chief Minister Amarinder Singh for their alleged double-speak on the farm bills. "Punjab CM is just making political comments. I want to ask him, why did his election manifesto say they'll do away with APMC Act and promote inter-state trade? Congress said it in both their national and state manifestos," Tomar declared.

Tomar added, "If Congress leaders say they are now going back on their manifesto promises, I can listen to their arguments. They are only misleading farmers with baseless points."

"Congress and some opposition parties are misleading farmers for personal gains as they themselves couldn't bring such reforms. Manmohan Singh and agriculture minister Sharad Pawar wanted to bring reforms, but due to pressure from some people, UPA couldn’t muster courage," Tomar told ANI.

Tomar told ANI the Modi government was committed to preserving the minimum support price (MSP) framework. "MSP will continue; we have declared MSP for Kharif and Rabi crops. As soon as Kharif crop is harvested, government procurement will begin," Tomar told ANI.

Tomar attacked the Congress on the MSP issue. "Has MSP ever been part of law? Congress ruled for 50 years; why didn’t they incorporate it in law? They're making it an issue as they don't have anything to criticise. MSP has always been Government of India's administrative decision and remains so," the minister said.