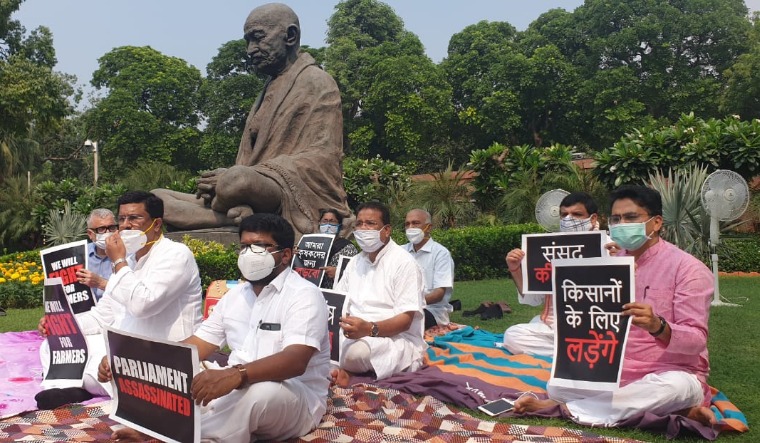 The Congress on Monday condemned the suspension of eight opposition MPs from the Rajya Sabha and also the rejection of the opposition’s motion of no confidence against the deputy chairman of the House. The Congress declared the Narendra Modi government is throttling the voice of members who are articulating the concerns that exist with regard to the controversial farm bills passed by the Upper House on Sunday.

The party, which was participating in a joint opposition sit-in in the Parliament premises against the suspension of the eight MPs, will soon fine-tune a plan to take the protest against the bills to the streets.

“The manner in which today eight MPs belonging to the Congress and other parties were suspended from the Rajya Sabha, the manner in which the voice of our colleagues who were raising their voice against the black laws was sought to be silenced shows that Modiji has brought the Gujarat model to Parliament,” said Randeep Surjewala, head of the AICC communications department.

“Elected democracy has become one-sided autocracy,” he said, adding the Modi government had nothing to do with the welfare of farmers and was only concerned about benefiting the financiers of the ruling dispensation.

Surjewala also said that the manner in which the resolution submitted to express no confidence in Deputy Chairman Harivansh Narayan Singh, and seek his removal, was rejected was in complete violation of parliamentary norms.

The leaders of the two Houses of Parliament will meet to take a call on the next course of action, with the options on the table being petitioning President Ram Nath Kovind over the contentious farm bills. The party will focus on the issue of why the government is hesitant on writing into law a guarantee for the minimum support price to be paid to farmers.

“We want to ask the government if it was necessary to bring the legislation in such a manner that it may boil down to privatisation of the agricultural sector,” said Adhir Ranjan Chowdhury, the Congress’s leader in the Lok Sabha.

Earlier in the day, Rajya Sabha Chairman M. Venkaiah Naidu had, while expressing outrage over the behaviour of some opposition MPs in the House, initiated the process for naming some of them and suspending them from the House.

Naidu said the deputy chairman had stated that if the members had remained in their seats, voting would have taken place. He said they could have also voted against the bill had the House been in order.

He also rejected the opposition motion seeking removal of the deputy chairman, saying it was not in proper format.

It was pointed out that as per the provisions of Article 90(c) of the Constitution, a notice period of 14 days was required for moving a resolution and not a motion. As the House is going to be adjourned sine die on October 1, the notice does not complete the required period of 14 days, hence, Naidu ruled that the motion given by the leader of opposition and other members was not admissible.