Congress to hold nationwide protests against farm bills from Sept 24 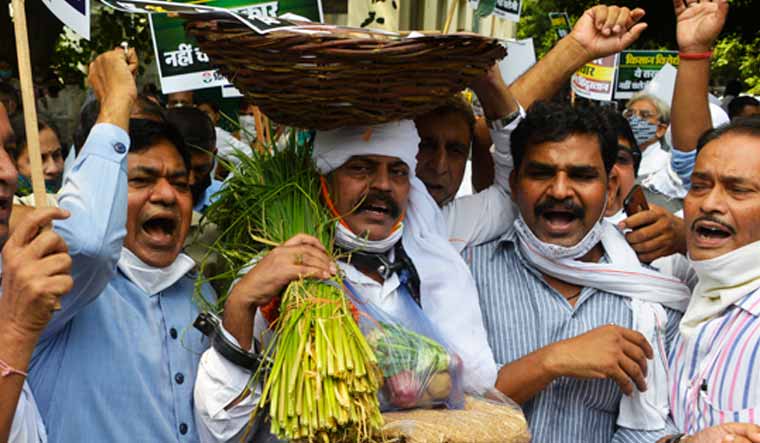 The Congress has decided to carry out a nationwide agitation against the controversial farm bills passed by Parliament, which includes press conferences, marches and a Kisan Sammelan (farmers meeting) in every state headquarter.

The party will also conduct a campaign to collect two crore signatures of farmers seeking a withdrawal of the contentious legislation.

A meeting of the AICC General Secretaries and in charges was held in the Congress headquarters today, the first physical meeting of the party since the COVID-19 outbreak in the country, to discuss the prevailing political situation, especially the farmers' unrest over the three farm-related bills passed by Parliament.

It was decided that the principal opposition party would launch a nationwide agitation on the issue, starting from September 24. The campaign against the bills will be preceded by press conferences in the states. On September 24, PCC chiefs, CLP leaders as well as MPs, MLAs, ex-ministers, ex-MPs and other leaders will undertake marches up to the Raj Bhawan in every state headquarters and submit a memorandum to the Governor addressed to President Ramnath Kovind seeking a withdrawal of the bills.

October 2, the birthday of Mahatma Gandhi and Lal Bahadur Shastri, will be observed by the party as 'Kisan-Mazdoor Bachao Diwas' (Save Farmers and Workers Day) and marches will be undertaken at every assembly and district headquarters—with party leaders and workers likely to court arrest. On October 10, all state units will hold state-level Kisan Sammelan (farmers' meeting) at the state headquarters.

“We are starting a nationwide agitation. We are totally with the farmers' associations and other opposition parties which are fighting for the farmers' cause,” said K. C. Venugopal, AICC General Secretary in charge of Organisation.

Addressing a briefing after the meeting, veteran leader A. K. Antony described the farm bills as “anti-farmer, anti-people and anti-poor”. He said the Congress will press upon the government to repeal the “black laws”.

With Congress President Sonia Gandhi and former party chief Rahul Gandhi not in the country right now, the party was at pains to stress that the meeting was held on the instructions of the two. Sonia has gone abroad for a routine medical check-up and Rahul is accompanying her. However, Rahul's absence especially from the scene at a politically crucial time has been taken note of by his critics.

“Today's meeting was called as per the directions of the Congress President and the former party chief, and a plan has been chalked out to carry out an agitation against the farm bills. We will go to the villages and join forces with farmers,” said AICC Treasurer and Sonia confidant Ahmed Patel.