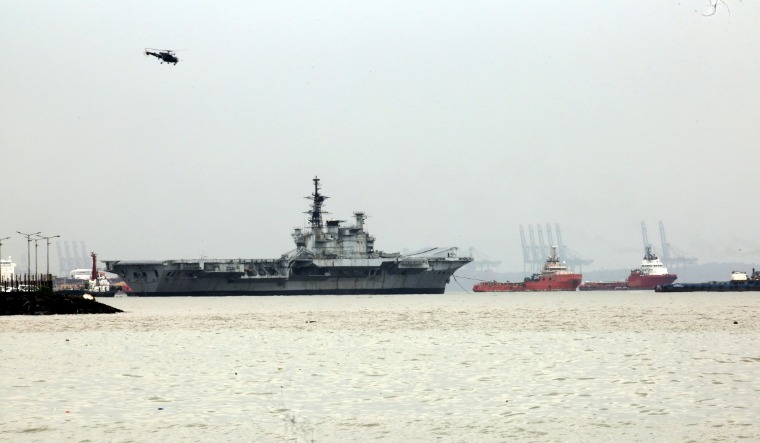 The Viraat leaving Mumbai on her final voyage | Supplied

The Indian Navy's second aircraft carrier, INS Viraat, set sail for the last time on Saturday as she was towed to Alang in Gujarat to be dismantled into scrap.

There had been several attempts to save the ship and convert her into a museum or hotel in order to ensure Viraat did not meet the fate of the Indian Navy's first aircraft carrier, INS Vikrant. The INS Vikrant was dismantled into scrap in 2014 after bids to preserve her failed. The Viraat, which was built in the UK, entered Indian Navy service in 1987.

I want to try one last attempt to save #INSViraat 🇮🇳

I rqst my media friends to amplify this appeal 🙏🏻@rajnathsingh pic.twitter.com/NkOJ452RyO

Chandasekhar tweeted on Saturday, "I want to try one last attempt to save #INSViraat Flag of India Wud Reliance, TATA, Adani, Wipro, HCL, Mahindra, Uday Kotak, Poonawalla, Tech companies like Infosys consider contributing to a trust to preserve our history? I rqst my media friends to amplify this appeal."

Retired commodore C. Uday Bhaskar, a noted strategic analyst, also praised Chandrasekhar and tweeted he was "glad to contribute in a modest manner".

Interestingly, a group of veterans in the UK had also been trying to save the Viraat. The Viraat served as the HMS Hermes in the Royal Navy from 1959 to 1984. It was the flagship of the Royal Navy's task force that repulsed the Argentine invasion of the Falklands in 1982. A former crewmember of the Hermes who served in the Falklands War had told THE WEEK his group was ready to attempt to save and preserve the Viraat even now if given a chance.

For Indian Navy veterans who watched the huge vessel being towed by tugboats on Saturday, there was a lump in the throat as they bade it an emotional farewell from the Gateway of India.

Viraat began its final journey from the Naval dockyard where it was berthed after being decommissioned in March 2017. A Navy helicopter circling overhead provided a majestic backdrop to Viraat's last voyage from its home base for over three decades.