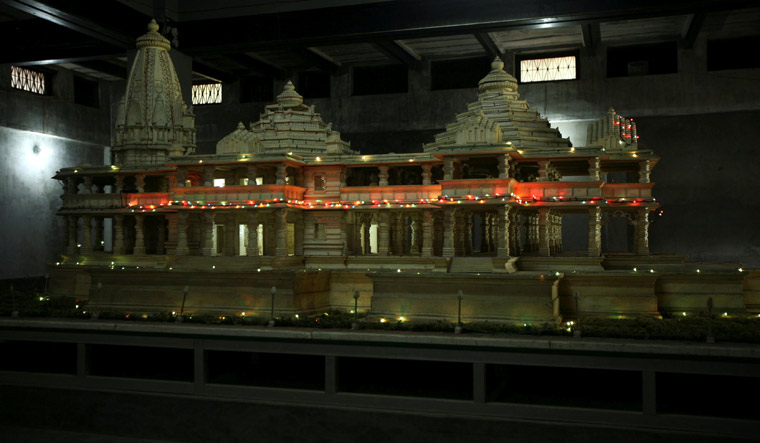 A model of a proposed Ram temple | Reuters

Ayodhya Senior Superintendent of Police (SSP) Deepak Kumar said the money fraudulently withdrawn from the account of the Shri Ram Janmabhoomi Teerth Kshetra Trust has been linked to an account in Maharashtra. “The account has been seized and we are investigating the matter. One (police) team has gone to Lucknow”, he said.

It was reported on Wednesday night that two withdrawals of Rs 2.5 lakh and of Rs 3.5 lakh were made from the Trust’s account on September 1 and September 3. A third cheque for Rs 9.86 lakh was presented at a branch of Bank of Baroda in Lucknow following which the bank made a verification call to the Trust’s general secretary Champat Rai. It was then that Rai found that money had been missing from the account. No payments were made on the third cheque for which the verification call was made.

The fraudulent transfer of funds raises many questions as withdrawals from the account are possible only through cheques jointly signed by the general secretary, treasurer and a member. A seer from Ayodhya said, “The Trust has been targeted since its inception. Even before an official website could be made and launched, an unofficial page was already functional. Who was behind it was never investigated.”

There have also been some unverified complaints that online donors to the Trust’s account in the Ayodhya branch of State Bank of India were not receiving due receipts for the same.

The Twitter account of the Trust calls for donations for “the construction of a Bhavya and Divya Mandir at the Janmbhoomi of Bhagwaan Shri Ram” and lists the ways in these can be made— UPI, through scanning of the QR Code, Fund Transfer/NEFT/RTGS/IMPS and Quick Pay. The account also mentions that on September 4, a sum of 2,11,33,184 was deposited as development fee and labour cess to the district authorities.

Meanwhile, the official website of the Trust (www.srjbtkshetra.org) has also been non-functional for the past few days.