Kerala MPs will raise the issue of purported withdrawal of the book, in Parliament 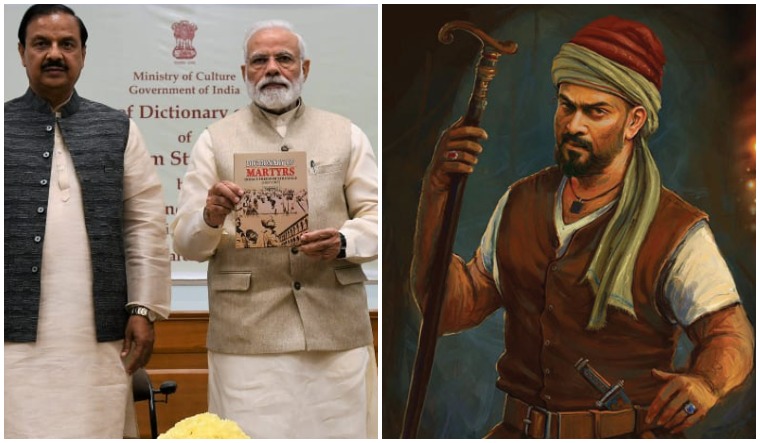 PM Modi with then culture minister Mahesh Sharma at the launch of the dictionary | PIB; a fanmade poster of Prithviraj-starrer 'Variyamkunnan' | via Facebook

The row over the Dictionary of Martyrs: India's Freedom Struggle 1857-1947 took a fresh turn today when Communist Party of India MP Binoy Viswam wrote to Prime Minister Narendra Modi urging him to intervene and suspend the three-member committee established by the Indian Council of Historical Research (ICHR) to review the entries in the book.

The book landed in the eye of the storm after right-wing groups such as Hindu Aikya Vedi objected to the inclusion of 1921 Malabar Rebellion leaders Variamkunnath Kunjahammed Haji and Ali Musaliar as freedom fighters. This led to a decision to form a three-member panel to review the entries in the book.

“In another brazen attempt to re-write the history of the Indian freedom struggle and discredit the contributions of freedom fighters who did not subscribe to the ideologies of the current ruling party, the Indian Council of Historical Research has constituted a 3-member committee to review entries in the Dictionary of Martyrs: India's Freedom Struggle 1857-1947," the Rajya Sabha MP said in his letter.

"Based on a 2016 report submitted to the ICHR by politically motivated individuals calling for the exclusion of Communist and Muslim martyrs, the ICHR's actions are deeply worrying and must be stopped immediately, he said.

He said the contributions of these Communist martyrs are widely recognised by the people of Kerala and are a source of inspiration for the youth, adding that their death anniversaries are passionately commemorated across the state each year.

“I urge you to immediately intervene in this matter and suspend the review committee established by the ICHR. As Prime Minister of India and a constitutional representative it is incumbent on you to prevent any attempts that seek to communalise our history and disturb the social fabric of the nation,” Viswam said in the letter.

What’s the book about?

The five-volume dictionary contains an account of the martyrs from India's First War of Independence in 1857, to India's Independence in 1947. The project was commissioned by the Ministry of Culture to the Indian Council of Historical Research (ICHR) to commemorate the 150th anniversary of uprising of 1857.

In this dictionary, a martyr has been defined as a person who died or who was killed in action or in detention, or was awarded capital punishment while participating in the national movement for emancipation of India.

Interestingly, the book was launched by PM Modi in March last year.

What triggered the controversy?

Discontent was brewing among the Hindutva groups ever since noted filmmaker Ashiq Abu, in July this year, and Malayalam superstar Prithviraj announced a film on Haji, titled Variyamkunnan. Haji was an early 20th century freedom fighter from Malabar who played a crucial role in the Malabar Rebellion against the British, and was shot dead by them in 1921.

The film announcement was slammed by right-wingers, who consider Haji “anti-Hindu” for having massacred Hindus during the rebellion. Soon, three more films were announced on Haji. While the first three films will portray him as a hero, the fourth, to be directed by pro-BJP filmmaker Ali Akbar will, apparently, “expose Haji’s real face”.

The debate took a political turn with Kerala Chief Minister Pinarayi Vijayan affirming that Haji was a warrior who led a brave battle against the British.

Now, with an excerpt from the book, which was, incidentally, recognised by the BJP-led government at the Centre, glorifying Haji doing the rounds on social media, Hindu Aikya Vedi and other such groups have intensified their protests against the inclusion of Haji and Musaliar in the book, and have called for a ban on the sale of the book.

Where does the matter stand now?

Close on the heels of the protests from right-wing groups, the book was removed from the website of the Union Ministry of Culture. Responding to the protests against its removal, ICHR officials were quoted as saying by the New Indian Express that it was done to “rectify the mistakes in the dictionary”, and that it will be reprinted soon.

In a bid to thwart the purported move to withdraw the book, Kerala MPs across parties, except, of course, the BJP, have decided to raise the issue during the monsoon session of Parliament, which begins on September 14. MP Binoy Viswam brought up the matter during a meeting of 28 Kerala MPs on Monday, which was chaired by CM Vijayan, following which all the parliamentarians decided to unitedly fight the “saffronisation of history books”.

(With inputs from Cithara Paul and PTI)