V.R. Krishna Iyer warned if a tragedy happened, Manmohan govt would be responsible 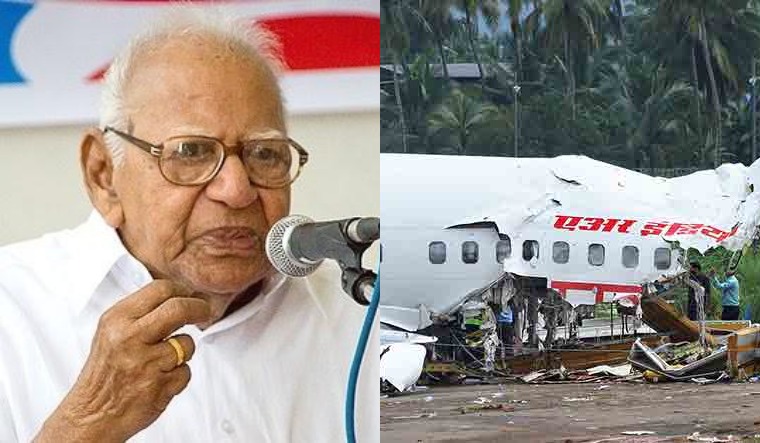 A collage of V.R. Krishna Iyer (via Twitter) and the wreckage of the Air India Express jet in Calicut (Reuters)

Aviation experts are not the only ones who had warned of risks posed by Calicut Airport’s runway. Eminent jurist justice V.R. Krishna Iyer had raised concerns about the Calicut Airport in 2011.

Flagging the safety issue at the Calicut Airport to then prime minister Manmohan Singh, justice Iyer had warned of a tragedy, if required measures were not taken.

After the crash at the Mangalore Airport on May 22, 2010, several safety recommendations regarding operations at tabletop runways were made.

In a letter, dated August 1, 2011, Justice Iyer, a former Supreme Court justice, while addressing Manmohan Singh as "sensitive prime minister", had asked him to carefully examine the Calicut Airport issues.

Justice Iyer wrote that he is sending a more elaborate letter pointing out the dangers of the Calicut Airport, warning, "if a tragedy happens—God forbid—your government will be responsible for negligence".

"Do have the matter thoroughly examined. Every Indian life lost is a grave distress which no compensation can redress," he said in the letter, adding that in the name of God and humanity, "I plead with you to have the matter of the Calicut Airport carefully examined and all measures taken to make the airport safe."

His letter becomes significant, as after the Mangalore crash, several experts had flagged safety concerns of tabletop runways including the one at Calicut. Justice Iyer, who stood for the rights of the downtrodden and reinterpreted bail jurisprudence as a Supreme Court justice, passed away in 2014 in Kochi.

He is often referred to as the "'man who triggered the Emergency." On June 24, 1975, he refused an unconditional stay on a Allahabad High Court verdict that held then prime minister Indira Gandhi guilty of electoral malpractices and invalidated her election. The next day, Indira Gandhi declared the Emergency.

Aviation experts claim that in India, Mangalore and Calicut airports are considered to be highly critical airfields, as the margin of error for the pilot is very less. There is not enough safe area for the pilot to land into after he loses control of the aircraft. Like the aerodrome at Mangalore, Calicut Airport is also situated on a hilltop, surrounded by valleys of thick forest with limited length of runway. The runway length is close to 9,000 ft.

On August 7, Air India Express Flight IX-1344 from Dubai, carrying 190 passengers and crew, skidded off the Calicut Airport runway and fell 35 feet into a valley and broke into two. The Boeing 737-800 was piloted by Captain Deepak Sathe, who had flying experience of over 36 years. Sathe was killed with his co-pilot and 16 passengers.

Captain Mohan Ranganathan, an aviation expert, says, "Runway(Calicut) is not fit. There are cracks with lot of rubber deposit forming. And due to rubber deposit and cracks, braking becomes difficult."