‘If Congress wants to save its ship, they have to change the pilot, co-pilot’ 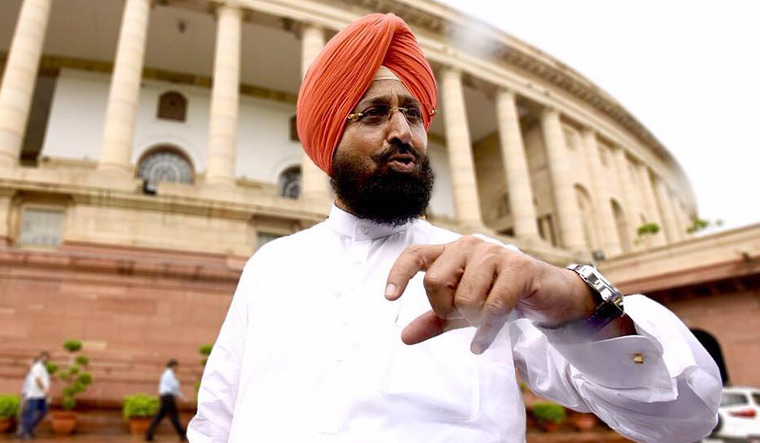 On the warpath against the Capt Amarinder Singh government in Punjab, senior Congress leader Partap Singh Bajwa said the chief minister has behaved like a 'maharaja' in removing his security and exposing him and his family to danger.

Bajwa said he was forced to approach the Governor on the hooch tragedy because the chief minister had publically stated that he did not care for his representations. He said both the chief minister and state PCC chief Sunil Jakhar need to be replaced for the party to have any chances of doing well in the next Assembly elections.

The Rajya Sabha MP also declared that while he wants to return to state politics in the Assembly elections in 2022 and contest polls, if Amarinder Singh would lead the party, then he would rather retire.

Why are you so upset with the Amarinder Singh government?

When I handed over the charge as PCC president to Amarinder Singh in 2016, at a rally in Bhatinda, holding the holy book of Sikhs in his hands, he took an oath that once given a chance by the people of Punjab, he will dismantle the five mafias in the state – the drug mafia, the mining mafia, the transport mafia, the cable mafia and the excise mafia. And we won by a never before majority.

However, the promises were not kept. Two of these mafias are still being run successfully by the Badals – one is transport mafia and the other is cable mafia. There is no curb on the drug mafia or the mining mafia. And more recently, we saw that more than 100 people lost their lives in the hooch tragedy. For four years, we have been mute spectators to the loot of Punjab, and these mafias have only grown instead of being dismantled.

The state Congress accuses you of anti-party activity.

As a Member of Parliament, I felt it was my duty to raise the issue. The Captain does not have a future, but we have a future ahead. The way he is completely isolated. The way he has outsourced his government to a few babus, the involvement of the Congress is not there, either of the workers or the leaders, this will result in the end of the party.

He has been very upset with me because of the criticisms that I have made of his government's functioning, highlighting what is going wrong.

In one of his press conferences on COVID-19, he was asked about the letters written by me and Shamsher Singh Dullo to him, and he said he did not care about our letters. He said he did not feel it was important to respond to our letters. So we are left with no other way of making our criticism known.

The demand for a CBI and ED probe in the hooch tragedy has become a flashpoint.

When the number of those who died went over 100, we felt since the chief minister is not going to take cognisance of our letters, the only way we could highlight the issue was by going to the Governor and telling him that since both the home and excise departments come under the chief minister, the CBI and the ED should probe the matter.

The government assigned the investigation to the Divisional Commissioner of Jalandhar. We raised a pertinent question that when the chief minister is in charge of both excise and home, can we expect a divisional commissioner, if the finger points at the higher ups in these departments or the office of the chief minister, how will the poor person take a call on this?

That is the reason why we requested the Governor for a CBI and and ED probe into the matter as earlier it was a monetary loss, but now lives have been lost.

The party has charged you with colluding with the BJP in taking on the state government.

Yes, they say that we (Bajwa and Dullo) are doing all this with the support of the BJP and that we want the government to fall. They should prove it by giving evidence of even a single MLA who we have rung up. What we are doing is akin to warning the driver of a vehicle that he is going off the road and there could be a major accident. The PCC President Sunil Jakhar has said a lot of unsavoury things against me, called me a backstabber etc. They say we are damaging the Congress. We are not damaging the Congress; we are trying to save the party.

We have asked for a change in the leadership. It is now high time, if the Congress wants to save its ship, they have to change both the pilot and the co-pilot.

There seems to be a breakdown of communication between you and the chief minister.

Yes, it is true. He has said in front of the entire Chandigarh media that he does not care for my letters. Can you tell a colleague who is a Rajya Sabha member, who has been a PCC chief that his letters will not be taken cognisance of?

Will you be giving your side of the story to the party high command?

Till the time nobody asks us, what kind of representation do we give? If they ask us, we will definitely respond. Has the chief minister done anything that he promised? He is doing exactly the opposite. And then he has the audacity of removing my security.

The state Congress says you don't need the state government's security since you have been provided security by union home minister Amit Shah.

What has Amit Shah got to do with it? The Leader of the House Ghulam Nabi Azad wrote to Shah, the home minister says he will look into but does not go beyond that. Then, I urged Azad Sahab to take up the matter with the Rajya Sabha chairman. Then we meet Vice President Venkaiah Naidu and explain to him that my father along with five other people were assassinated in 1987. I also had a miraculous escape in a major bomb blast in 1990. After that, Amit Shah said he will have a relook at it and eventually my security, which had been withdrawn nine months earlier, was restored in March this year.

The chief minister is acting as if he is the maharaja of some state. Decisions cannot be taken on whims and fancies of the chief minister. He has done such a mean thing by withdrawing my security over political differences. He has exposed me and my family to danger.

Why do you feel the chief minister is being unresponsive to your concerns?

Maharajas are used to people staying in their durbar who keep buttering their ego. If someone stands up to them and says something that is honest, that is not appreciated by them.

Capt Amarinder Singh has announced that he will contest the 2022 Assembly elections, and you are not happy with it. Why?

For three-and-a-half years, this government has been in sleep mode. It has not worked at all. I have already decided – in 2022, Bajwa will be back in Punjab, no longer in central politics. But if Amarinder Singh is leading the party, then I will not fight the election. It is better to retire than be a part and parcel of this corrupt regime.