‘No interview or statements’: Congress’s tough message to MLAs in Rajasthan

Congress cracks whip even as Pilot patches up with Gehlot 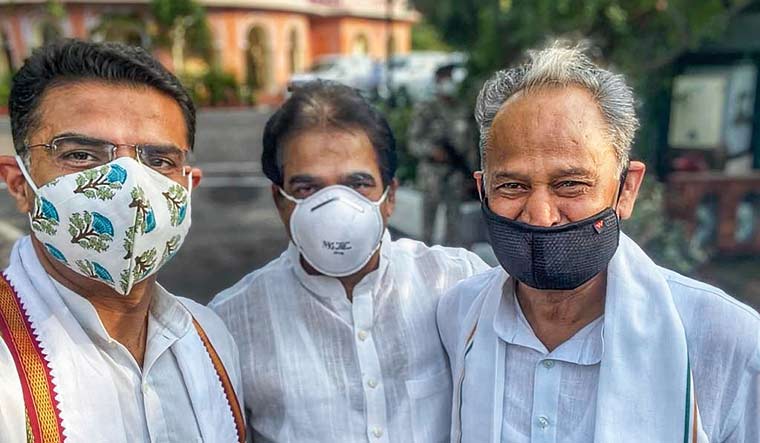 The Congress party has cracked the whip in Rajasthan and directed its legislators to refrain from making any public statements or giving interviews to media. The party, which finally managed to tide over the month-long crisis triggered by former deputy chief minister Sachin Pilot’s open revolt against Chief Minister Ashok Gehlot, is making all effort to prevent another rebellion and has sent out a tough message to its MLAs.

“Forget the nightmare of the last 30 days and work together for the people of Rajasthan. We have done a lot of post-mortem but from now on no words, no interviews and no statements. This is the message of Congress President Sonia Gandhi and Rahul Gandhi. They told me to convey this,” Congress general secretary, organization, K.C. Venugopal said in a video message.

“The party has to come first and if the party is not there then nobody will be there so everybody has to work with unity. It is time for unity and everybody should work together,” he said.

On Thursday, Pilot had met Gehlot at latter’s residence in Jaipur where a Congress Legislatur Party meeting was held ahead of the assembly session. The meeting came a day after the former state party chief called truce and returned to party-fold following his meeting with top leadership in Delhi.

Meanwhile, the Gehlot government on Friday won the vote of confidence in the Assembly. According to initial reports, during the voice vote 125 were in favour of the government while 75 against it.

The prospects for Gehlot's government had improved considerably after the Congress High Command orchestrated a truce between the Pilot and Gehlot factions earlier this week. However, the chief minister on Thursday had remarked that he would win the trust vote even without the help of the 19 MLAs who had rebelled against the government.

Pilot and 18 other MLAs rebelled against the government in Rajasthan, leading to his sacking as deputy chief minister and state party chief. He, however, called off his rebellion after his meeting with former national president Rahul Gandhi and AICC general secretary Priyanka Gandhi in Delhi on Monday. Following the meeting, the Congress had formed a three-member committee to look into the issues raised by Pilot.

The Congress had a total of 107 MLAs in the 200-member Rajasthan Assembly. This includes six MLAs who were previously with the BSP.