I feel this attack is an attempt to malign my image, he said 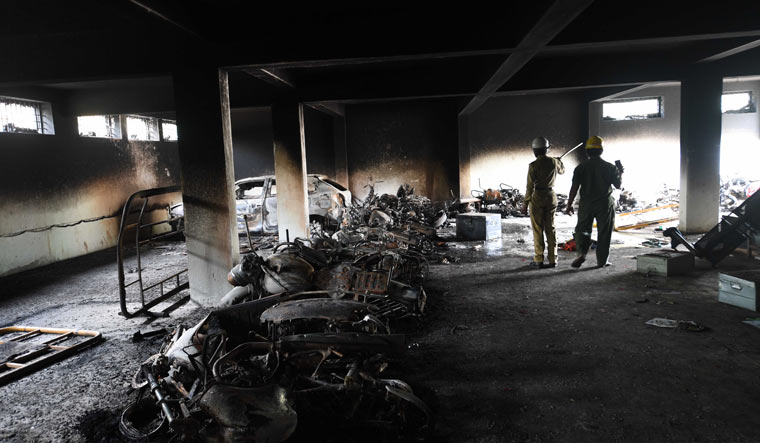 “They have burnt down my home of 50 years, the house where my parents lived and nine of us siblings grew up. Even though I am an MLA, I feel helpless and wonder who can protect me. I want the government to arrest the culprits who incited this violence,” demanded Congress MLA Akhanda Srinivasa Murthy, who broke into tears while addressing a press meet in Bengaluru on Wednesday.

Murthy, who had come to meet Revenue Minister R. Ashok sought protection for himself and his family members as he believes that the rioting mob wanted to take his life.

"They barged into the house on Tuesday late evening, looted jewellery, money, sarees and burnt the furnishing and eventually the entire house. They targeted the houses belonging to two of my brothers too. I was lucky to escape as I was outside and was on my way back home, when the police alerted me," said Murthy.

According to Murthy, his house could have been salvaged if only the police and fire tenders would have arrived earlier. "The commissioner told me the mobs had made it impossible for the police to enter the locality. If this is the plight of an MLA, who has won with maximum votes, what could be more scary," asked Murthy.

The dalit leader, who was in a state of shock, wondered aloud as to who could have plotted against him.

"For the last 25 years, I have worked among the people and I shared camaraderie with all the communities. I feel this attack is an attempt to malign my image. But I don't suspect anyone. I want the police to investigate and bring the guilty to book," said the MLA, who also distanced himself from his nephew, P. Naveen, who's Facebook post is believed to have triggered the violence.

"Naveen is my elder sister's son. But I have nothing to do with him as there is a gap between us for the last 10 years. If somebody has played mischief or posted something offensive, I will join in condemning it and the police will take appropriate action," said Murthy.

Minister Ashok sent out a stern warning to the miscreants. "Each of the miscreants will be smoked out from their hideout. This is Yediyurappa government, and we will not hesitate to act against goondas and those who incite violence," said Ashok, adding that Tuesday's violence was a "well planned attack" intended to "finish off" the MLA and to create panic across Bengaluru.

"The mob attacked the MLA's house, a police station and was prepared to spread the violence to other localities like Shivajinagar. But timely action by the police has helped contain the violence. A thorough probe will reveal the truth," said Ashok, who reviewed the situation in DJ Halli in the wee hours of Wednesday.

Home Minister Basavaraj Bommai, who reached Bengaluru on Wednesday afternoon, hinted that the government was keen on adopting the Uttar Pradesh model of recovering the damages caused to the public property from the people who indulge in rioting and vandalism.

KPCC chief D.K. Shivakumar dubbed the incident as a "conspiracy", but also blamed the police apathy that led to the situation to escalate.

"I visited the spot today. It is clear that the miscreants have targeted the MLA and his relatives and attacked their houses. We condemn this violence and believe no one is above the law. However, the fact is that the police's failure to take action against Naveen even after the community members complained about the offensive post led to the incident. The police did not act despite knowing it was an emotional issue," alleged Shivakumar, who also questioned the credentials of Naveen.

"We know who Naveen is. The police has discriminated and delayed taking action against Naveen. We have formed a team of senior Congress leaders to look into the causes for the incident. The government should ensure prompt action against people posting derogatory posts on the social media," said Shivakumar.