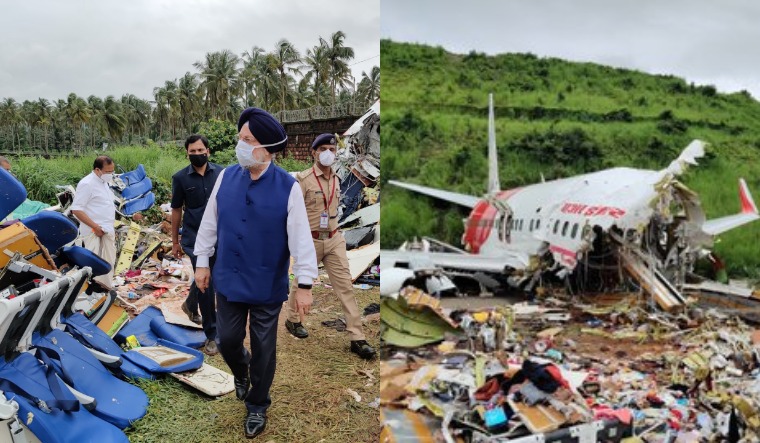 Investigators of the Aircraft Accident Investigation Bureau on Saturday arrived at the Kozhikode Airport to investigate the crash of an Air India Express Boeing 737 the previous evening in which at least 19 people have died.

News agency ANI reported that the AAIB investigators have recovered the aircraft's digital flight data recorder (FDR) and cockpit voice recorder (CVR). The FDR and CVR are commonly called 'black boxes' and are crucial in air accident investigations. The equipment will be sent to Delhi for analysis.

The FDR contains data from various sensors on the aircraft. Data on the FDR includes time, altitude, airspeed, aircraft's heading and position of various flight control equipment such as control column and pedals. The CVR contains a recording of conversations among the pilots and other noises in the cockpit.

Meanwhile, PTI has reported that DGCA had issued a notice to the Kozhikode airport in July 2019 over critical safety lapses.

The Directorate General of Civil Aviation pointed to cracks on the runway, water stagnation and excessive rubber deposits among other lapses in its show-cause notice.

The DGCA conducted the inspection after an Air India Express flight coming from Dammam in Saudi Arabia had a "tail strike" while landing at the Kozhikode airport on July 2 last year, an official said.

"After the July 2 incident last year, the DGCA inspected the airport on July 4 and July 5 and found various critical safety lapses," said a senior DGCA official.

However, it is not clear if any action was taken against Rao after the show-cause was issued. The show-cause notice, which PTI accessed, said "cracks are observed at runway 28 TDZ (touchdown zone) and along runway C/L (centre/left) marking at runway 10 TDZ".

The touchdown zone (TDZ) is the part where the aircraft first contacts the surface while landing. The touchdown zone is ahead of the threshold area of the runway. The notice also said "excessive rubber deposit" was observed in the area from runway C/L marking to three metres on both the sides of touchdown zone of runway 28.

Similar excessive rubber deposits were found by the DGCA along runway C/L marking of touchdown zone of runway 10, according to the notice. "Water stagnation of about 1.5 metre length was observed on the area between runway edge and intermediate turn pad on runway 28," it said.

Besides, the DGCA found several cracks in aircraft stand number 5. It also observed that a "portion of Apron surface" of about 111 metres was damaged, it said. Apron is the area of the airport where aircraft are parked, refuelled and where passengers board.

"A steep downward slope of approximately five feet depth is observed immediately after the apron behind aircraft number 1, which needs to be levelled and graded," the notice said.

The DGCA observed a shortage of reserve stock of 6,630 litres of Aqueous Film Forming Foam concentrate (AFFF) and 140 kg of "DCP complementary agent"—both are used to put out fires—at the Aircraft Rescue and Firefighting (ARFF) station of the airport.