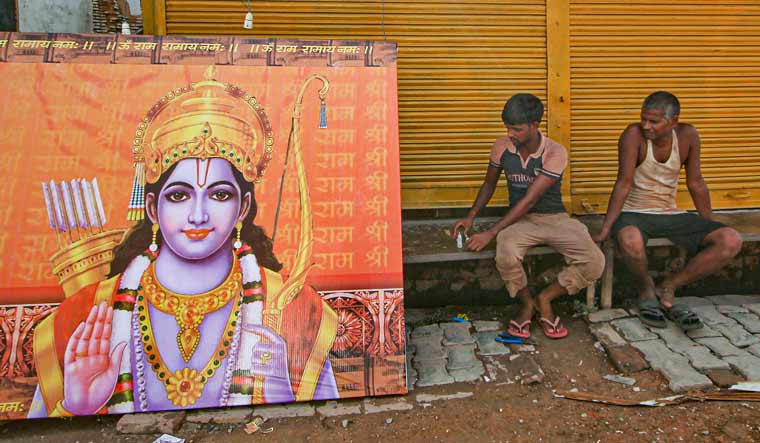 Preparations go on, ahead of the 'bhoomi pujan' for the construction of the Ram Temple, in Ayodhya | PTI

Apna Dal (S) MLA Chowdhury Amar Singh has claimed that Dalits were ignored while invitations were extended for the ground-breaking ceremony of the Ram Temple in Ayodhya. Talking to reporters on Monday, he said that the haste shown by Prime Minister Narendra Modi for the construction of the temple should also be shown for giving houses and pension to poor.

Modi is scheduled to attend the big event on Wednesday for which preparations are in full swing.

"Dalits and backwards have been deprived of attending the Ayodhya bhoomi pujan event. The haste which PM showed for the temple should also be shown for giving house and pension to poor," the MLA from Apna Dal (S), an ally of the BJP in Uttar Pradesh, said.

"The face of those who struggled for the temple is not seen. They are being ignored. The trust constituted for the construction of the temple does not have people from backward, SC and ST communities. It is a 'Ved Pratha trust' and seems that Lord Ram is only of the BJP," he said.

The MLA from Shohratgarh constitutency further said that President Ram Nath Kovind should also be invited for the event.

"We remember that under Congress rule, the then President Buta Singh did 'shilanyas' and he was an SC," he said.