I think it is Lord Ram's will that I attend the event, he said 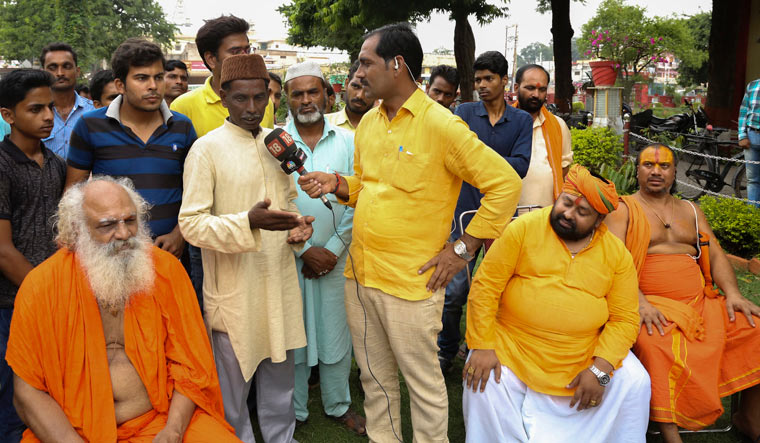 Iqbal Ansari, who was a litigant in the Ayodhya land dispute case, has decided to gift a 'Ram nami' stole and a copy of the Ramcharitmanas to Prime Minister Narendra Modi when he attends the bhoomi pujan ceremony for the Ram temple in Ayodhya on Wednesday.

"Yes, I have received the invitation from Shri Ram Janmabhoomi Teerth Kshetra Trust for the bhoomi pujan ceremony. I will certainly attend it. The dispute is over now after the court's verdict," Ansari, 69, told PTI.

"Our prime minister is coming. I will meet him and give him a 'Ramnami' stole (with Ram's name written on it) and Ramcharitmanas as a present," Ansari said.

His father Hashim Ansari, the oldest litigant in the Babri Masjid-Ram Janmabhoomi land dispute case, died at the age of 95 in 2016 after which the son started pursuing the case in the court.

Talking about Wednesday's ground-breaking ceremony to mark the beginning of the construction of a grand Ram temple, Ansari said, "I belong to Ayodhya. All this (temple's construction) will change the fate of Ayodhya. We all want our children to get better opportunities".

He further said, "I respect sadhus and saints. I am happy to have received the invitation for the ceremony. I think it is Lord Ram's will that I attend it".

When asked what he would have done had the court decided the case in his favour, Ansari said he had wanted the construction of a school and a hospital on the disputed land. "I feel the city needs development. The future of our children should be safe and secure and they should get employment. Dispute in the name of religion should end now and we should let the city witness a new beginning," he said.

The Supreme Court had, in November last year, paved the way for the construction of a Ram temple by a Trust at the disputed site of the Babri Masjid's demolition in Ayodhya, and directed the Centre to allot an alternative five-acre plot to the Sunni Waqf Board for building a new mosque at a "prominent" place in the holy town in Uttar Pradesh.

The state government has allotted a five-acre land in Dhannipur village in Sohaval Tehsil of Ayodhya for the mosque's construction.