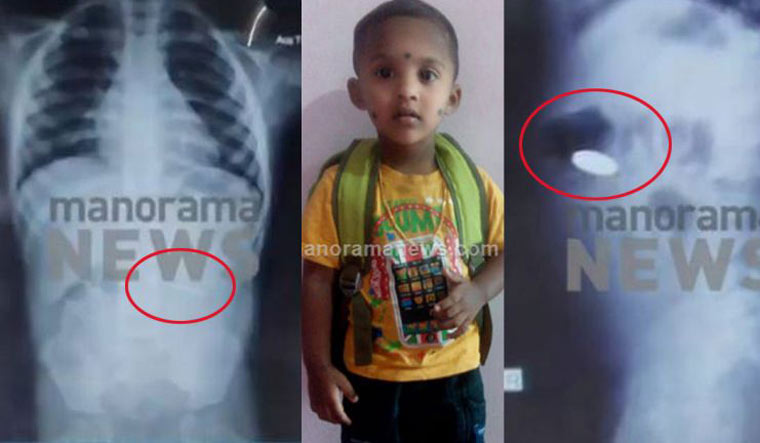 Kerala Health Minister K.K. Shailaja has ordered a probe into the death of three-year-old boy, Prithviraj, after he swallowed a coin in Kadangallur, Aluva.

The order comes in the wake of serious allegations from the child's relatives against the Alappuzha Medical College doctor who attended to the case.

The principal secretary of the department of health has been asked to submit a report on the matter at the earliest.

The investigation will look into whether the child was denied treatment and if there was any negligence or error on the part of the hospital authorities.

Meanwhile, the X-ray visuals of the three-year-old were released on Sunday, following the allegations. The coin was located in the stomach and not in the air tubes or lungs of the toddler, doctors said.

Prithviraj's X-ray was taken at the Alappuzha Medical College Hospital during his visit there.

The three-year-old's COVID-19 result has returned negative in the TruNat test conducted after death. Only a post-mortem examination can reveal the cause of death. A police surgeon will conduct the autopsy due to the controversial nature of the incident.

The Alappuzha Medical College team has insisted that the coin cannot be the cause of the boy's death.

The child's grandmother said that on Saturday morning, Prithviraj told her that he had swallowed the coin. She immediately called an autorickshaw and took the child to the Aluva District Hospital. After his X-ray was taken, medical officials said he had no problem and that they could go home.

However, as she was standing on the road outside the hospital crying, the driver of another auto said she could take the child to the Ernakulam General Hospital to get a second opinion. The hospital authorities provided all possible help to the child and the superintendent said the child was not in any trouble. He was then taken to the Alappuzha Medical College in an ambulance.

The doctor at the medical college told her not to worry and that a surgery can be performed after three days. He also advised the grandmother to give the child bananas and plenty of water to ensure the removal of the coin through bowel movement. She then returned home with the boy.

But when she called him to have tea at 5pm, he did not move, she said. Though he was rushed to the Aluva District Hospital with the help of neighbours, he died later.

She said she was taking care of the home by working at other houses. She alleged that her grandchild was denied treatment because they were poor. She said she did not take the child to a private hospital because the doctor at the Alappuzha Medical College said there was no problem with him. Also, she didn’t have the money to go to a private hospital.

The auto driver who took them to the hospital said the doctor told them to not come there with the child anymore and to go to some other hospital. “This is something no doctor should say,” the auto driver said.

The coin the child had swallowed had reached the small intestine. However, there were no paediatric surgeons for surgery at either the Aluva District Hospital or the Ernakulam General Hospital.

It is learnt that the health department will look into this matter.

However, the superintendent of Alappuzha Medical College said the child did not die because he swallowed the coin. He said the coin was in his stomach and, therefore, the child could not have died due to shortness of breath. The coin should have gone out during bowel movement. The superintendent said that the child was sent back after completing all the procedures to ensure he did not have a problem.