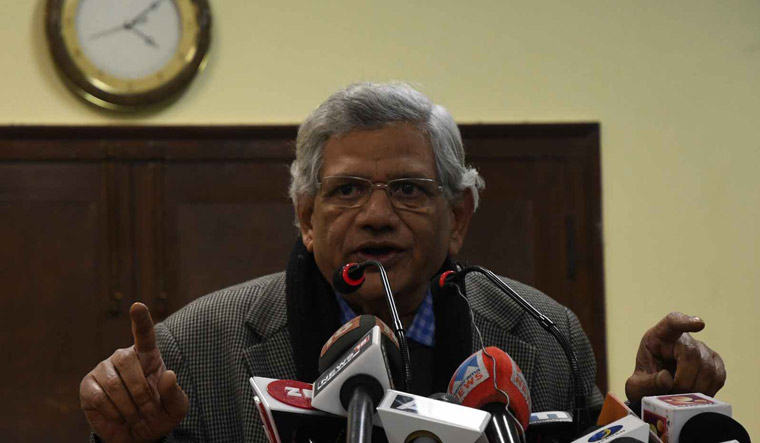 The CPI(M) on Monday hinted support for the Ashok Gehlot government in Rajasthan to ensure that BJP is not successful in destabilising the state government through “horse trading”. The Left party said its two MLAs will ensure that BJP's “gameplan” does not not succeed.

“The BJP is trying to topple the democratically-elected governments of other parties by engineering defections through naked horse-trading using the huge resources, earned through dubious means, at its command. The CPI(M) thoroughly opposes BJP's plans to destabilise democratically elected governments,” said party general secretary Sitaram Yechury, briefing the media about the two-day meeting of the party's Central Committee.

Yechury said similar effort was being made in Kerala where the gold smuggling case is used to dislodge the Left government. “The case is handled by the central agency. Investigations are on. The guilty should be punished. The CPI(M) Central Committee is confident that the people of Kerala will defeat this disruptive move of the UDF and the BJP at a time when all efforts are needed to be focused on combating the COVID-19 pandemic,” he said.

For the Bihar elections, scheduled in October-November, he said: “The three state-level Left parties—CPI(M), CPI, CPI(ML)—have jointly declared that the Left will cooperate with all other forces who are interested in achieving the objective of defeating the BJP-JDU-LJP alliance.”

The Central Committee trained its guns on the government for causing immense misery to people for imposing an “abrupt, unprepared, unplanned, unilateral” lockdown which not only proved ineffectual in containing the surge of the pandemic, but also led to widespread job losses and ruination of livelihoods. The Left party was critical of the economic policies pursued by the Central government in the name of self reliance. Atma Nirbhar was in effect self-subservience, not self-reliance, the Central Committee said in a statement.

“The government has abdicated its responsibility. People have been left to fend for themselves. Instead of solving people's problem, the BJP was busy implementing RSS agenda in much more aggressive manner,” the statement said.

“The stimulus package announced in the name of India’s self-reliance is actually a blueprint for India’s self-subservience to private capital, both foreign and domestic. All sectors of our economy have now been opened up for FDI through automatic route, including railways, coal, minerals and insurance. Most public sector undertakings are being privatized, including railways, ordinance factories, BSNL etc.  and also in electricity, coal, minerals, petroleum, banks, insurance and the financial sector. This loot of public resources is accompanied by efforts to negate the hard-earned rights of the working class through dilution of the labour laws. In many states, the working hours have been increased from 8 hours a day to 12 hours,” it said.

Referring to the increase in communal polarization, the statement said in Delhi a totally false chronology of events to whitewash the role of the RSS/BJP and their affiliates in the riots was being aggressively pushed by the Delhi Police, even as many young activists including students who participated in the peaceful anti-CAA protests were being targeted.

At the end of the two-day meeting, the Left party has come out with 16 demands before the Central government and also announced a week-long protest from August 20, apart from joining a nationwide protest call given by the trade unions, the kisan sabhas and the agricultural labour unions on August 9.

The Left party has demanded that immediate cash transfer of Rs 7,500 per month for the next six months to all families outside the income tax bracket be made to overcome the misery caused by the pandemic and the lockdown. The other demands include: extend free food distribution for the next six months for all; expand MGNREGA to ensure at least 200 days of work a year; increase central expenditure on public health to at least 3 per cent of the GDP; scrap the ordinances that remove the Essential Commodities Act and amend the APMC Act; withdraw all proposals to abolish or amend labour laws; scrap PSU privatisation; award degrees to the final year graduate and post-graduate students on the basis of their previous semesters’ performance; immediately release all detained since August 2019 in Jammu & Kashmir; release all political prisoners; withdraw Environment Impact Assessment 2020.