Violence down in Kashmir valley, ceasefire violations by Pakistan up: DGP 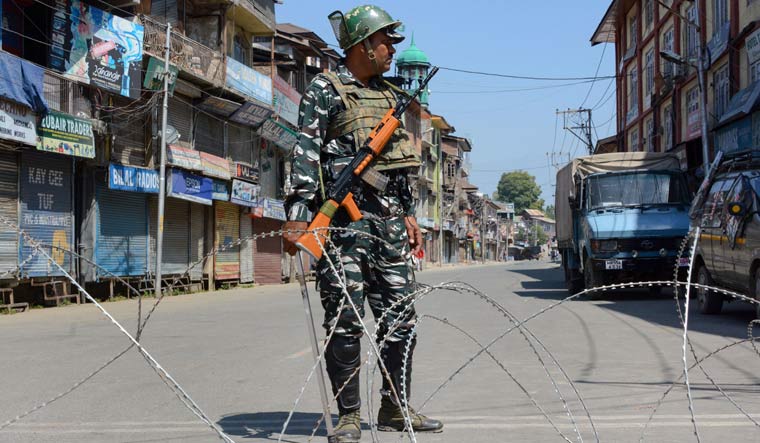 Jammu and Kashmir DGP Dilbag Singh on Friday said the overall law and order situation in the valley had improved and violence had come down, but ceasefire violations by Pakistani troops along the Indo-Pak border had gone up by 50-60 per cent this year.

Dilbag Singh inaugurated two open air gymnasiums, one each at Udhampur, Reasi, and dedicated these health facilities to the public, besides an upgraded conference hall at Range Police Headquarter, Udhampur, and Lower Subordinates Quarters at Arnas.

Singh was on a visit to twin districts of Udhampur Reasi Range to review the crime and security scenario of these districts.

"(Overall) law and order situation has improved significantly while violence has also come down. All security agencies are working in close synergy, which is yielding good results," he told reporters at Udhampur.

The DGP said in Jammu province militancy is almost wiped out except for two to three militants who are still active in Kishtwar district.

He said that “unfortunately our neighbouring country Pakistan is always prompted to disrupt the peaceful atmosphere in Jammu and Kashmir”.

Singh said that “our officers and jawans on the border and in the hinterland are ever ready to tackle such types of attempts by Pakistan-sponsored terrorists to disrupt peace and order”.

On ceasefire violations by the Pakistan troops along the Indo-Pak border, the DGP said there was an increase of 50-60 per cent in such incidents this year as compared with last year.

He also said police were fully prepared to deal with any situation in view of the first anniversary of abrogation of provisions of Article 370 on August 5.

"People have been cooperating with us. Situation will remain calm and peaceful in days to come," Singh said.

He said Jammu and Kashmir Police is always on the forefront to make its people safe and secure and added that an initiative has been taken by police in association with the health department in organising ''plasma screening camp'' in Srinagar.

The DGP said police personnel who had contracted COVID-19 and had recovered will voluntarily donate plasma.

He advised people to come forward to donate their plasma to COVID-19 patients.