At present, 2,525 villages are under water 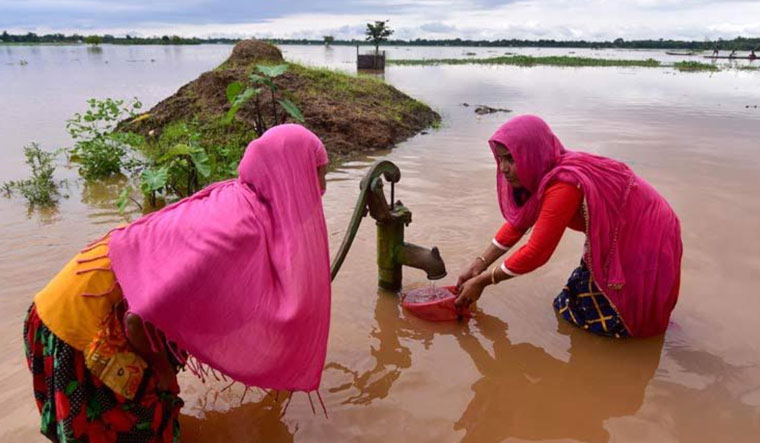 Women collect drinking water from a hand pump in a flood-hit area, at Madhabpara village in Nagaon district of Assam | PTI

The flood situation in Assam deteriorated on Wednesday with two more persons losing their lives, even as the number of people affected rose to over 26 lakh across 26 districts, an official bulletin said.

According to the daily flood report of the Assam State Disaster Management Authority (ASDMA), one person each died at Baghbor of Barpeta and Morigaon revenue circle in Morigaon district.

With this, the total number of people losing their lives in this year's flood and landslide has gone up to 115 across the state—89 were killed in flood-related incidents and 26 in landslides.

Goalpara is the worst-hit district with over 4.68 lakh people suffering, followed by Barpeta (3.82 lakh people affected) and Morigaon (3.08 lakh people).

Till Tuesday, more than 24.19 lakh persons were suffering due to the deluge across 24 districts.

It further said authorities are running 391 relief camps and distribution centres across 20 districts, where 45,281 people have taken shelter.

A total of 3,383.81 quintals of rice, dal and salt, and 606.10 litres of mustard oil along with other relief materials such as tarpaulin, baby food, candle, matchbox, mosquito net, biscuit, soap, drinking water, cattle feed, mask and wheat bran have been distributed.

The Brahmaputra is flowing above the danger marks at Dibrugarh, Dhubri and Goalpara cities, besides at Nimatighat in Jorhat and Tezpur in Sonitpur districts.

Its tributaries Dhansiri at Numaligarh in Golaghat, Jia Bharali at NT Road Crossing in Sonitpur, Kopili at Kampur and Dharamtul in Nagaon, Beki at Road Bridge in Barpeta, Kushiyara at Karimganj town and Sankosh at Golokoganj in Dhubri are also flowing above the danger levels.

Massive erosion have been reported from different places of Biswanath, Majuli, Baksa, Udalguri and Kokrajhar districts, the ASDMA said.

The bulletin said a total of 131 camps out of 223 at Kaziranga National Park, 18 out of 40 camps at Rajiv Gandhi Orang National Park and 24 out of 25 camps at Pobitora Wildlife Sanctuary have been affected by the deluge.

The deluge has so far taken away the lives of 120 animals, while 147 others were rescued in Kaziranga National Park, the bulletin said quoting the forest officer of the Eastern Assam Wildlife Division.

The flood has also affected 23,89,401 domestic animals and poultry across the state, it added.