A massive blast took place near Oil India Limited's Baghjan well in Assam's Tinsukia district on Wednesday, causing injuries to three foreign experts involved in the dousing of the well fire raging for more than a month.

The PSU said the experts received minor burn injuries while removing a spool from the well head.

The experts were provided immediate medical attention at the well site and taken to the burn care unit of a private nursing home in Dibrugarh before they were discharged.

The injured experts are Anthony Steven Reynolds, Doug Dallas, both from the US and Craig Neil Duncan from Australia of Alert Disaster Control company who have been engaged to douse the fire raging at the well site since June 9 following a gas blowout from well number five since May 27. Two firefighters were killed in the blaze. 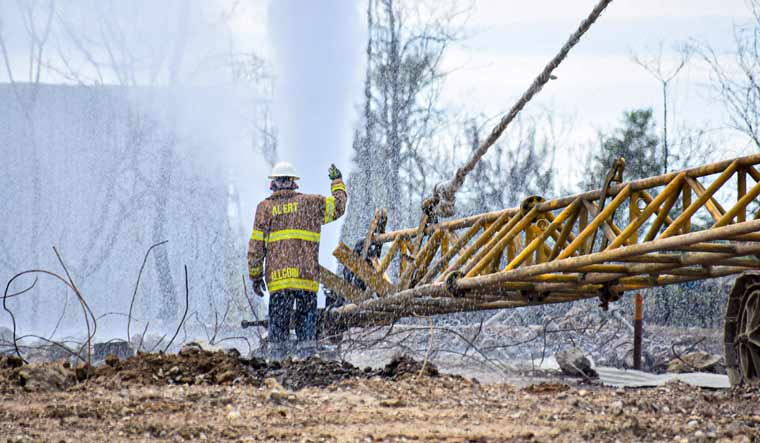 Water being sprayed at Baghjan Oil well site after three foreign experts were injured in an explosion, in Tinsukia district, Wednesday, July 22, 2020 | PTI

The blowout control operations at Baghjan were suspended after the blaze but it is expected that it will resume on Thursday.

The cause of the blast, its scale and nature are being ascertained, an official said.

Villagers said that the blast's sound was heard from a distance of 10 km away.

An official release said he also reviewed the situation and advised OIL authorities to provide best treatment to the injured experts.

The blowout had triggered protests by locals, who demanded the arrest of OIL CMD for alleged negligence of the company in preventing the tragedy and for not doing enough to douse the flames.

OIL in a release claimed that the company was facing continued protests and blockades across many of its wells and field locations, leading to heavy production loss since June.

Operations were disrupted in 12 oil and five gas wells and the cumulative production loss since May 27 due to bandhs and blockades was estimated at 15590 MT crude oil, 34.00 MMSCM of natural gas, the release said.

Due to blockades there was production loss of 442 MT of crude oil and 1.62 MMSCM of natural gas on Saturday because of disruptions in 14 oil wells and five gas wells.

Various assessments and impact studies of the blowout as well as the blaze in villages and nearby forest areas by multiple agencies such as ERM India, TERI, CSIR-NEIST and IIT-Guwahati are going on at present, the release said.

Surveys for assessment of damage for compensation by the district administration are in progress in both Tinsukia and Doomdooma circles and 1864 families have been surveyed till July 21, it added.