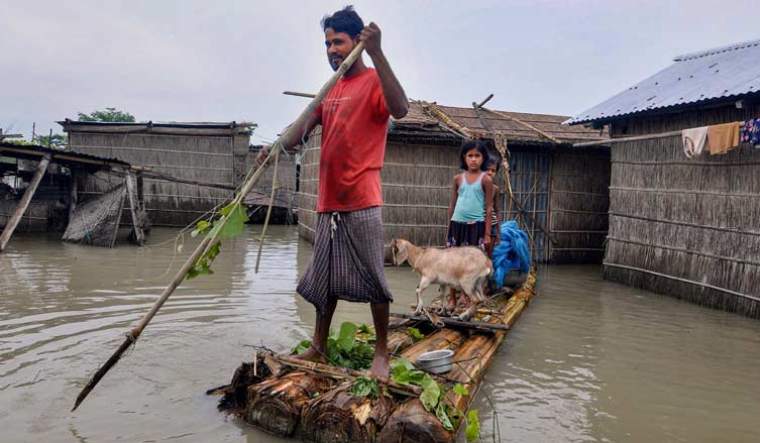 The death toll in the Assam deluge rose to 87, while heavy rainfall in the catchment areas of the Gandak river in Nepal led to flooding in parts of north Bihar on Tuesday.

In Meghalaya, four children and a woman died in floods in the West Garo Hills district and 1.52 lakh people have been affected, Chief Minister Conrad K Sangma said and announced Rs 4 lakh ex-gratia to the next of kin of the deceased.

The National Disaster Response Force (NDRF) has positioned 122 teams in 20 states to tackle the flood and heavy rain situation during the ongoing monsoon season. A maximum of 19 teams have been deployed in Bihar, followed by 12 in Assam, a spokesperson of the force said.

The death toll in the Assam floods rose to 87 as the situation due to the calamity remained unchanged with 24.19 lakh people affected in 24 districts, a government report said.

According to the daily flood report of the Assam State Disaster Management Authority (ASDMA), one person died at Raha in Nagaon district and another at Morigaon town. Twenty-six others have died due to landslides triggered by the rains and floods, it said.

Heavy rainfall in the catchment areas of the Gandak river in Nepal has led to the discharge of excess water from the Valmikinagar barrage in West Champaran district, flooding parts of north Bihar.

Several rivers except the Ganges continued to flow above the danger mark and the flood waters have hit nearly four lakh people in eight districts, a disaster management department bulletin said. Meanwhile, at least 10 people died due to lightning strikes in four districts of the state, an official said.

In Meghalaya, district officials in West Garo Hills said that floods have ravaged the low lying areas in at least three development blocks.

Over 1.5 lakh people have been affected by the flood caused by the backflow of the Brahmaputra river, causing its tributary, Jinjiram river, to swell up.

“Saddened to see 5 lives lost because of the floods in #GaroHills. Government has released an ex gratia amount of Rs 4 Lakhs each to the next of kin of the deceased. We are doing everything to ensure the safety of our citizens during this time. Our condolences to the bereaved families,” Sangma said in his social media posts.

Meanwhile, Union Home Minister Amit Shah spoke to the chief minister and assured all support in dealing with the flood situation in the state.

A fresh spell of heavy rains lashed the national capital, inundating the low-lying areas and affecting traffic movement in parts of the city.

Residents shared pictures and videos of rainwater gushing into their houses and vehicles navigating waterlogged roads on social media platforms.

The monsoon trough is also running through the region and these two factors led to moderate to heavy rains in Delhi-NCR, they said.

On Sunday, at least four people died as heavy rains lashed the city.

Widespread rains lashed Haryana and many parts of neighbouring Punjab, causing the maximum temperatures to drop sharply, the IMD said.

It said more rain or thundershowers are likely at a few places in the two states over the next two days.