The assaulters have been identified, and action is being taken, says police chief 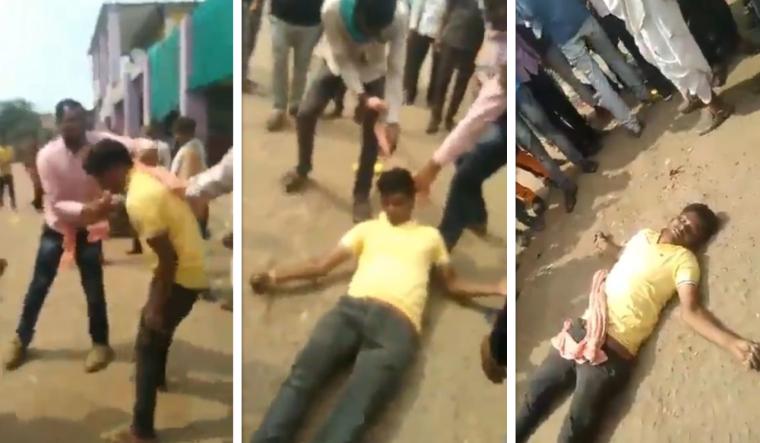 Days after an incident of police brutality on a dalit family in Madhya Pradesh’s Guna caused widespread outrage, another video of a man being badly thrashed and dragged with a scarf around his neck in Guna city market has sparked furore.

Initially, it was thought that the victim in the newly surfaced video was also a dalit, but district administration and police have said that the man did not belong to SC or ST community.

The incident occurred on Thursday, but the video of the assault started circulating on Saturday prompting the police to swing into action. The man, initially thought to be one Dharmendra Valmiki, was thrashed badly by local traders and others at the local grain market on the suspicion of theft of grain. Later, when his condition worsened, he was left on the road and the attackers fled the spot, sources said.

Later, however, he was identified as Vikas Mali, a known offender with seven cases registered against him, Guna police said.

Newly appointed superintendent of police (SP) of Guna, Rajesh Kumar Singh, told THE WEEK that the assaulters also had been identified from the video footage of the incident and will soon be detained for necessary action. He, however, clarified that the victim does not belong to the SC or ST community as rumoured.

“The man has been identified as Vikas Mali who has about seven cases of theft, burglary, bootlegging and gambling registered against him and also there is an arrest warrant from court against him. So he was also arrested following the incident. But necessary action will also be taken against those who attacked him,” Singh said.

Guna district collector Kumar Purshottam, who was also appointed recently, spoke to THE WEEK and reiterated that though the victim does not belong to dalit community and was a known offender, no one had right to take law into their hand (by assaulting him) and police is taking due action in the matter.

The latest video sparked furore because of the incident on July 12 when a dalit couple had consumed pesticide and the entire family was beaten up by the police in Janakpur Chak of Guna district. Guna is the home turf of BJP Rajya Sabha member Jyotiraditya Scindia who fought his Lok Sabha elections from the constituency.

After widespread outrage, the state government had removed the district collector S. Vishwanathan, SP Tarun Nayak and even the inspector general (IG) of police of Gwalior range Raja Babu Singh on July 16.

On the latest assault video, the Madhya Pradesh Congress tweeted saying “Another dalit faces savagery in Scindia’s area Guna. Dalit man was beaten up in public and dragged with scarf around neck in the market.”

In another tweet, MP Congress, while saying that another dalit has fallen victim in Guna, asked “Scindia ji. All this was also included in the deal?”