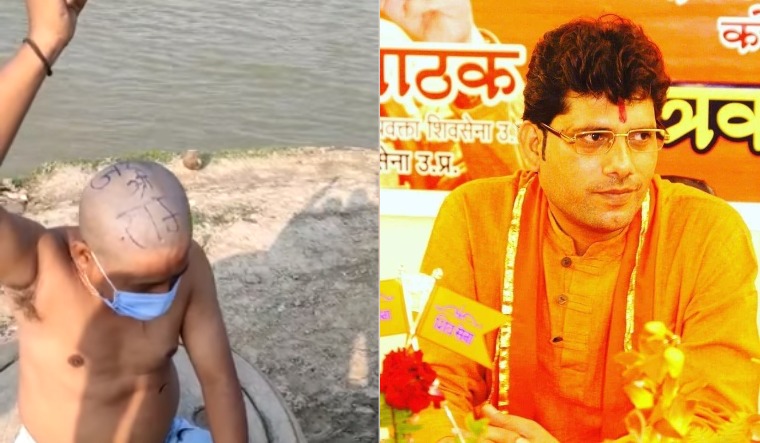 The claim by Nepalese Prime Minister K.P.S. Oli earlier this week that the ‘real’ Ayodhya was located in his country may have been an attempt at political posturing. But it appears to have triggered resentment on the ground in at least one part of Uttar Pradesh.

On Friday, Nepal's Ambassador to India Nilambar Acharya contacted Uttar Pradesh Chief Minister Yogi Adityanath after a video went viral of a man, apparently a Nepalese national, in Varanasi having his head forcibly tonsured and being made to chant 'Jai Shri Ram’. The perpetrators wrote 'Jai Shri Ram' on the man's head.

Acharya re-tweeted a tweet by a journalist that claimed that Adityanath had assured the safety of Nepalese nationals in Uttar Pradesh.

The video of the tonsuring incident was uploaded on Facebook by Arun Pathak, convenor of the fringe group Vishwa Hindu Sena, on Thursday. The video appears to have been shot near a body of water. In the video, the head of the man can be seen being tonsured amid chants criticising Oli and in praise of India for giving livelihoods to Nepalese people. In a separate post on Facebook, Pathak warned "Jai Shri Ram would be written on heads of many Nepalese so that Oli would never speak against Lord Ram".

Pathak wrote a post on Facebook on the incident, claiming "thousands had given their heads in sacrifice for a grand Ram temple in Ayodhya”. Pathak declared that in response to Oli's comments on Ayodhya, "his activists had written Jai Shri Ram' on the head of a Nepali”.

The Vishwa Hindu Sena had made headlines in the aftermath of the clash between Indian and Chinese soldiers in Galwan, Ladakh, last month. Vishwa Hindu Sena activists had blackened signboards of Chinese restaurants in Varanasi and warned shops against selling Chinese goods.