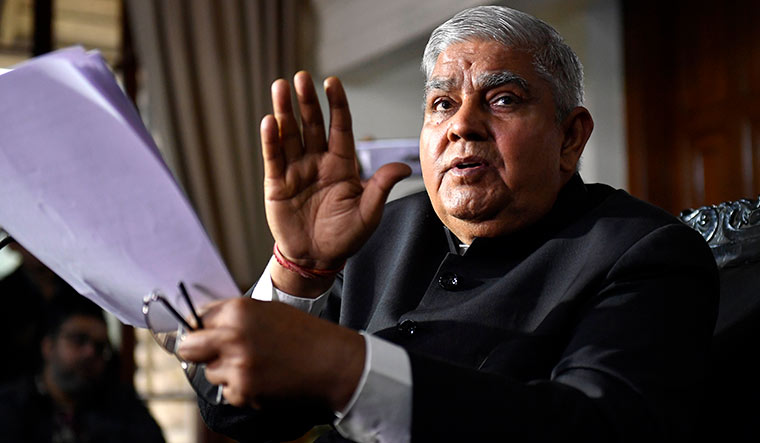 “In the interest of education, in the interest of students, with utmost reluctance, I will have to set the process in motion to deal with their conduct in accordance with the applicable Act,” governor Dhankhar told the media at a press conference at Raj Bhavan.

Dhankhar said he had called the conference because of the worrisome state of affairs in the education department in West Bengal, and as chancellor of all the universities, he had the capacity to call the conference. He said that the VCs had decided not to attend and kept mum at the direction of the state government.

He said interaction of the governor and chancellor with vice chancellors is natural as also part of his duty.

“I planned a meeting with vice chancellors on January 13, 2020. But the government on January 9 had written that the department is of the opinion that there was no requirement of any further meeting at this time,” the governor said.

Dhankhar said he was stunned seeing the move of the government.

“This was preposterous and unacceptable. Totally unmindful of the position I hold and wrote to Hon’ble CM on January 15 indicating that the judgmental approach was inappropriate and the stalemate must come to an end. Unfortunately, there has been no response even after six months,” he said.

The governor was told later that there was “no provision of any virtual conference in the rules of the government”.

“‘Politically caged’ education cannot serve wholesome purpose. I find that there is tightening of this political cage in the state,” he said.

The governor said that the purpose of his conference was to address the issue of the students and their studies during Covid-19 pandemic situation when educational institutes are closed. He also wanted to address other issues in the institutes in the state.

“I strongly urge the universities to ensure that fresh entrants in higher education are not made to suffer in any manner. For the last few years students were exploited financially for admissions. This must not happen this time. It is a very serious crime. If a student has to pay for admission to the university in this manner, then it sends very wrong signals and adversely impacts our society,” said Dhankhar.

The governor said he would hold the government of West Bengal solely responsible for the mess in the education system when students cannot graduate and would have to wait longer to get a degree or diploma.

Dhankhar said questions were raised by the government on his “propriety to call any such meeting”.

“But, the bigger question is if the state government is in never-ending denial, then what to do? Is it inappropriate for a governor to raise legitimate questions?” he asked.

The governor also questioned whether VCs believed that he was not the boss.

“Can the education department and VCs self-proclaim that they cannot be commanded by a chancellor?” he asked.

Dhankhar said the state government has not come out with any policy statement or document on students.

“Degrees cannot be given without evaluation, which happens in the form of examinations,” he said.

Chief Minister Mamata Banerjee had recently written a letter to Prime Minister Narendra Modi asking him to suspend the examinations by the national boards and universities till the situation became normal. Banerjee’s position is quite clear—to allow closure of the education system during the pandemic. While some support this position, there are others who are opposed to it.

The governor disputed that VCs acted without any rules and regulations. Online classes were taken, but what about pupils who could not afford or get connectivity in remote villages, he asked.

“They have not stopped, and carried on by informing the students, faculties and administrative staff, about the course, classes and examinations. They have even granted degrees holding virtual convocations,” he said.

He said students were denied that right because the state has failed in containing the Covid-19 situation.

The governor had earlier almost sacked a vice chancellor of Cooch Behar Panchanan Barma University but later left the matter by cautioning the VC for not inviting him, as chancellor of the university, for the convocation. Dhankhar said he did not sack the VC because of the request of Education Minister Partha Chatterjee.

“I was compelled to issue a Show Cause Notice of dismissal to the VC of the Cooch Behar Panchanan Barma University. My Order of 12 June, 2020 is comprehensive. I will read some parts of it so that you can get an idea about it. I ended only with a caution to the VC, in otherwise a very serious situation. Copy of this was forwarded to all the VCs so that they appreciate the situation,” Dhankhar said.

But this time he vowed to take serious action.

“There was non-compliance. This cannot be accepted,” he said.

The state government is yet to give any reaction to the governor’s outburst.