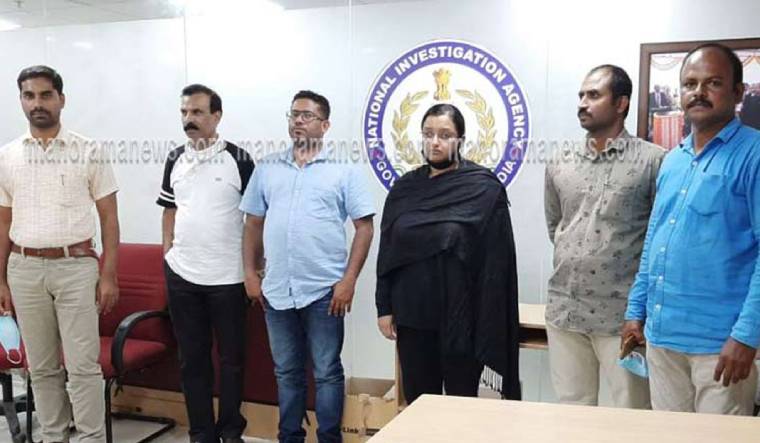 After a week-long drama, Swapna Suresh and Sandeep Nair, the second and fourth accused in the Trivandrum International Airport smuggling case held in Bengaluru on Saturday, will be brought back to Kerala on Sunday for further questioning and probe.

The National Investigation Agency (NIA) recorded the arrest of Swapna and Sandeep on Sunday after taking them into custody from Bengaluru the previous day.

They were arrested around 7 pm from a service apartment in Koramangala in Bengaluru by an NIA team from Hyderabad.

They were later taken to the NIA’s office in Domlur for questioning. An NIA team led by DySP Radhakrishnan Pillai had also reached Bengaluru later in the day.

The investigators got to know about Swapna’s location by Saturday afternoon after her daughter switched on her phone, and the NIA passed on the information to its Hyderabad unit.

It is believed that Swapna, who was absconding since the arrest of P.S. Sarith—a former PRO at the UAE Consulate—in the case pertaining to smuggling gold through a diplomatic parcel, was in Kerala till Friday.

She had been in Kochi to meet a lawyer to move an anticipatory bail application in the Kerala High Court. She left for Bengaluru after the NIA took over the case.

Swapna went into hiding on July 5 after a diplomatic baggage addressed to the UAE Consulate and containing 30 kg of gold worth Rs 14.8 crore was seized by customs officials at the Trivandrum International Airport.

Sarith, who was dealing with the baggage on behalf of the UAE Consulate in Thiruvananthapuram, was arrested earlier.

He had confessed to Swapna’s involvement in the case.

While on the run, Swapna had made sure that she carried nothing with her that would help investigators trace her. However, her daughter’s phone ensured her arrest.

Swapna had reached Bengaluru with her husband, two children and the other accused in the case, Sandeep Nair. The central intelligence had informed NIA about the service apartment that Swapna rented and also other details of her movements.

An NIA team from Hyderabad then reached the apartment and arrested Swapna and Sandeep after ascertaining their identities.

According to sources, they had rented an apartment owned by a Sudheendra Rai.

Sources said the audio clip that Swapna had released to some TV channels had helped the intelligence agencies to keep track of her movements.

Even though the media received the messages after they were transferred through many phones, the intelligence agencies were able to determine the IP address of the source phone.

The intelligence agencies were tracking the phone since Friday. The agencies then inspected all the phone’s incoming and outgoing calls.

As the case is being investigated under Unlawful Activities (Prevention) Act, the central agencies did not have to go through the elaborate processes that state police have to follow to collect phone call details.

It is learnt that the NIA team will bring Swapna and Suresh to Kochi from Bengaluru on Sunday itself.

The agency is taking the security of Swapna and Sandeep seriously, as they sniff international links. It is, therefore, also possible that the duo will be first produced in the NIA court in Bengaluru on Sunday and then brought to Kochi.

Given that there are tight restrictions in Bengaluru and Karnataka in view of the COVID-19 pandemic, the investigating team would also have to be assisted by top government officials to facilitate their return to Kerala.

BJP Kerala president K. Surendran demanded an explanation from the chief minister on how the state police let Swapna escape when they restrict common man from even commuting within the state.