Vikas Dubey encounter: UP STF reveals sequence of events that led to his killing

The statement said five policemen were seriously injured in the accident 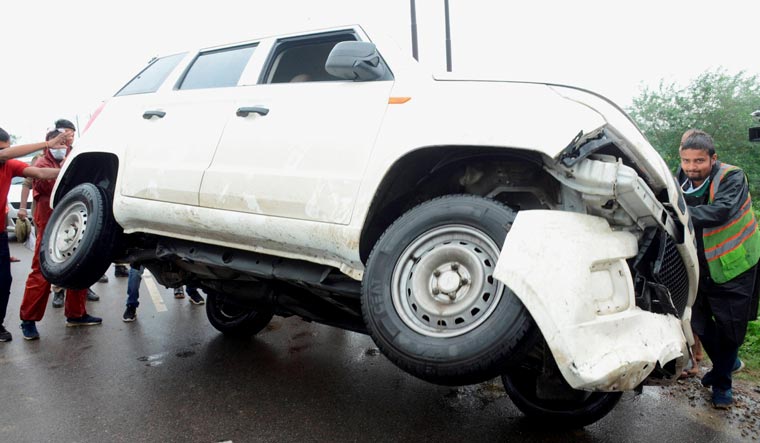 Even as several questions are being raised about the killing of gangster Vikas Dubey in an encounter, the Uttar Pradesh Special Task Force (STF) released a statement in which it narrated how the entire sequence of events unfolded.

The STF said the car in which the gangster was being taken to Kanpur overturned when the driver, who was tired after a long journey, swerved to avoid a herd of cattle that came on to the road suddenly.

The statement said five policemen were seriously injured in the accident. Sensing an opportunity to escape, Dubey snatched a gun from one of the cops, Ramakant Pachauri, and tried to run away.

When the cops in the other vehicles arrived at the accident spot, the injured policemen apprised them about the situation and the cops started chasing the gangster. According to the STF statement, the policemen made every attempt to arrest Dubey alive.

However, he shot at the policemen, forcing them to open fire in self-defence. After he fell down, the police gave him first-aid and took him to a hospital. Two cops, Shivendra Singh Sengar and Vimal Yadav, too sustained bullet injuries.

STF issues press note in #VikasDubey encounter matter. "A herd of cattle had come in front of the vehicle due to which driver took sudden turn leading to accident...Police tried to go close to him to nab him alive but he continued to fire. Police retalitaed in self-defence..." pic.twitter.com/iOXaXv8vno

Many had questioned the encounter, with Former Union minister and Loktantrik Janata Dal leader Sharad Yadav saying the encounter looked "fake and straight out of a film."

Senior TMC leader and MP Mahua Moitra came down heavily on the Uttar Pradesh government, asserting that justice is the "only thing killed" in Chief Minister Yogi Adityanath's "encounter raj". "It is the job of the courts to deliver justice. It is the job of the police to deliver the accused. Shocking that India under @BJP has confused the two," Moitra said in a tweet.

Congress leader Randeep Surjewala said the killing of the gangster in an encounter raises several questions and sought answers on who were the people sitting in echelons of power who were granting protection to criminals like him. "Congress demands that the unholy nexus between organised crime and the ilk of Vikas Dubey with those sitting in the echelons of power be probed by a sitting Supreme Court judge," Surjewala said at a press conference.

Bahujan Samaj Party chief Mayawati, meanwhile, demanded a Supreme Court-monitored probe into the encounter. She wanted the inquiry to cover the killing of eight policemen last week in an ambush allegedly masterminded by Dubey.