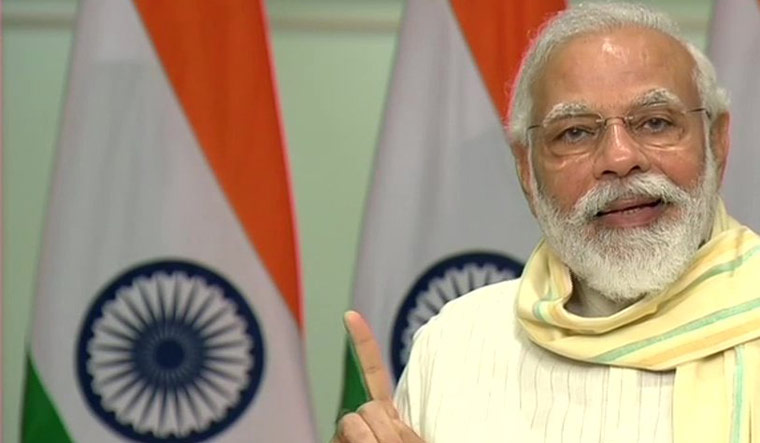 BJP leaders hailed Prime Minister Narendra Modi's visit to Ladakh on Friday amid a military stand-off between India and China, with party president J.P. Nadda saying his "words give words to the emotion of 130 crore Indians and act as a great morale booster for our armed forces".

"Veer bhogya vasundhara. PM Narendra Modi's words give words to the emotion of 130 crore Indians and act as a great morale booster for our armed forces! True leadership in action!" Nadda said in a tweet after Modi addressed soldiers in Ladakh's Nimu.

'Veer bhogya vasundhara' is a Hindi idiom that means that the brave will inherit the earth.

Lauding the prime minister's visit, Home Minister Amit Shah said it will boost the morale of our valorous soldiers.

Modi's visit to Ladakh came amidst the ongoing stand-off between the Indian Army and China's PLA (People's Liberation Army) in the forward areas of the high-altitude region.

Tensions had escalated between the two countries after 20 Indian Army personnel were killed in a fierce clash with Chinese troops in the Galwan Valley in eastern Ladakh last month.

"Leading from the front. Prime Minister Narendra Modi Ji with our brave and courageous personnel of Army, Air Force & ITBP at a forward location in Ladakh.

"This visit of honourable PM will surely boost the morale of our valorous soldiers," Shah tweeted along with multiple pictures of Modi with the soldiers.