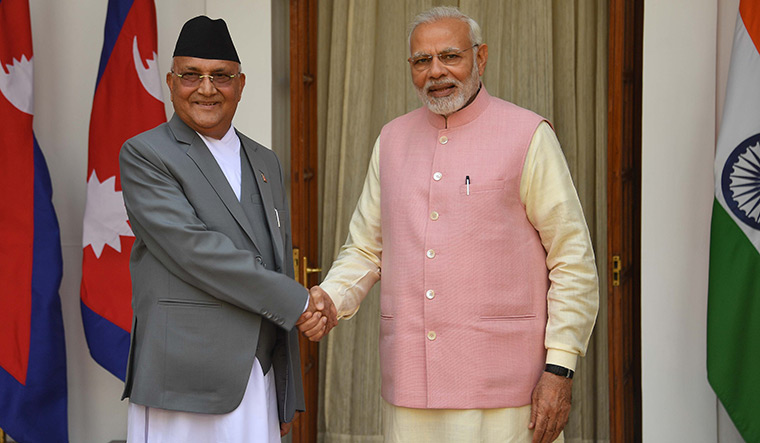 Every nation likes to spin myths about itself—this is part of the foundational DNA of every nation. And with a few exceptions, the smaller the nation, the bigger the myth. In south Asia, where myth-making is an established form of art, this assumes lurid proportions. We see this in Nepal’s characterisation of itself as a nation of highland warriors spurning the evil practices of the plainsmen, the so-called dhotiwallahs.

In Nepal’s case, though, it is the Madhesis and their brethren across the border in the plains of Mithilanchal and the Terai that have been the source of Nepal’s noblest claim to fame, that of Gautam Buddha, who, perhaps rather disappointingly for the mountain warriors, chose to be born and propagate his enlightened words in the region today called Madhesh. This is yet another of the delicious ironies that characterise Nepal—should it lay claim to the birthplace of Gautam Buddha as it assiduously does and propagate all that is noble about Buddha including peaceful coexistence? Or should it puff out its chest about the all-conquering Gurkha?

The 'Gurkha myth' was propagated mainly during the days of the British Raj when the people in the plains were sought to be cowed down by the noble warriors from the mountains, whether Gurkha, Pathan or indeed, the Garhwali, Kumaoni and the Dogra, all of them supposed martial classes to the British.

Yet another myth Nepali blowhards like to proclaim is the supposed conquest of Kumaon and Garhwal by a Nepali adventurer in the 18th century, conveniently ignoring that a substantial portion of the invading troops were actually Garhwalis and Kumaonis themselves. Nonetheless, most of the troops chose to settle in India proper and not go back to the supposed paradise in the high Himalayas.

Enough with the history lessons! Coming to contemporary times, shorn of the sentimental rhetoric of roti and beti, which frankly is very insulting to betis, Nepal, like all of India’s neighbours, sees India in terms of what it sees across the Nepal border, which are the poverty-stricken backwaters of northern Bihar and eastern Uttar Pradesh. This is stark reality. People and countries believe what they see with their eyes, and not pedantic statistics proclaiming trillion-dollar economies and billion-dollar trade.

Again, like the citizens of all of India’s neighbours, when Nepalese come to India, they don’t spend time gawking at Antilia (Manisha Koirala might, but that’s a different story for another day!), but in trudging through the crowded lanes and bylanes of Delhi, Lucknow, Varanasi, Gaya and Kolkata mostly. Barring some posh parts of Delhi, the rest of India very closely resembles Nepal; so, the Nepalese disbelieve a lot of the myths that we Indians spin about ourselves. Another irony there!

But lets also be honest and accepting that India bares everything to everyone, and there is no pretence, unlike our giant neighbour to the north, where most things are a pretence. Like Indians gawking about the great cities of the West, its very likely Nepalese are equally impressed with what China has established in Shanghai, Beijing, Chengdu or even Lhasa, and there must be a tinge of ambition in Nepal to emulate them, or even better, accept the Chinese word to transform Nepal,and in particular the Kathmandu valley, which really is the intellectual heartland of Nepal.

China then offers to the denizens of the Kathmandu valley, who like to think of themselves as descendants of mountain warriors, panaceas to two fears that strike at the very root of Nepalese nationalism: The fear of Madhesis creeping up north and diluting the mountain-men ethos, and the fear of India subsuming them with all the talk of shared Hindu heritage and common roots drawing from Pashupatinath. These then are the aspects naïve Indian analysts need to watch out for—excessive focus on supposed common identity symbols leads to a fear that it is just a ploy by India to overwhelm Nepal.

China has, I’d think, probably recognised these primal fears in Nepalese intellectualism and offers a very straightforward transaction: China will provide Nepal money, plenty of money, and Nepal, in return, will have to move into China’s ambit. Both Nepal and China probably understand that even with hundreds of Confucius Institutes across Nepal, that country is unlikely to give up Nepalese for Mandarin at least in the medium term. So, Nepal gets access to lots of cash, some of which is used to build infrastructure, and most of it goes into the pockets of shady power brokers and mountebank intellectuals for hire in Kathmandu, and China gets to entrench itself through engineered Rashtriya Sabha resolutions.

The one aspect that Indian security planners will have to watch out for is that Nepal doesn’t turn into another axis that threatens the Indian heartland. That threat, if the current trends continue, is still a few years away. It is more likely that China is utilising Nepal for a prophylactic action, so that India doesn’t open a front through Nepal in the short term, what with the close alliances between the Nepalese and Indian Armies.

Going forward, India will have to be more activist in Nepal, even at the risk of irritating some important players within Nepalese society. For far too long, we have been lackadaisical on one hand, and been too enamoured of amateurish advice from JNU types on a real country strategy towards Nepal. One of the shibboleths we have to wean ourselves off is that the Maoists of Nepal can somehow be made to see India in a positive light—that is impossible, especially when even the Maoists of India prefer China!

The real play will, perhaps, be currency. We have an open border with Nepal, which Pakistan has long been using to push in fake rupee notes. Can India or should India return the favour? It all comes down to money: Whether the Maoists in Nepal, the Islamists in Pakistan or the capitalists in China, everyone is dancing to the same tune. So, why shouldn’t India play the same dum maaro dum tune, with spiked notes? So, I end with another irony!