The conversation was on account of National Doctors Day 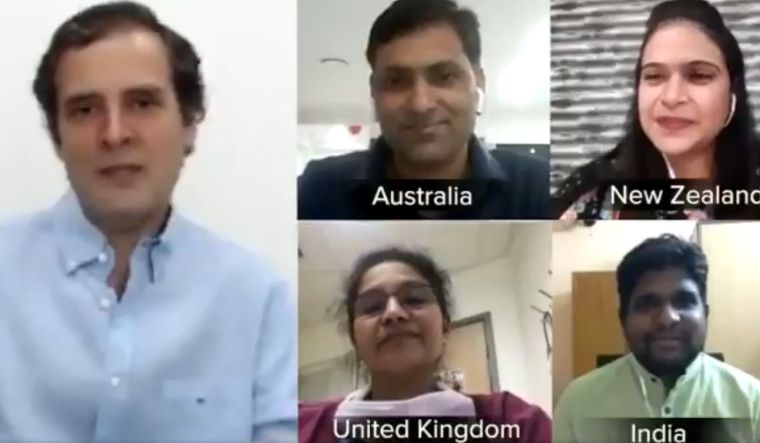 Four nurses—Anu Ragnat (New Zealand), Narendra Singh (Australia), Sherlylmol Puravady (the UK) and Vipin Krishnan (AIIMS, New Delhi)—shared their insights and experiences with the Congress leader. “When this Covid-19 started, we initially thought this is a simple flu. We thought this flu is killing more people than Covid. We didn’t take it seriously. When it started rolling over, and we saw news in Italy that the death toll was rising higher and higher, then we thought that this is not a flu, that this is serious,” said Singh, who belongs from Sikar in Rajasthan.

Krishnan, the AIIMS nurse who belongs from Kerala, apprised Gandhi about the COVID situation in the country, especially in Delhi. "On May 27, the infection rate in Delhi was 13.7 per cent and we were doing 7,000 tests per day. By June 12-13, our infection rate had crossed 30 per cent and we are doing under 5,000 tests per day. This is surprising given that our deaths and infection rates are increasing, but we have reduced testing," he told Gandhi. Both Krishnan and his wife are under quarantine after having contracted Covid-19.

He also brought to Gandhi's attention the skewed ratio of the medical community in the country. "We have 1.2 million registered allopathic doctors in India. We have around 3.7 million registered nurses in India. When we are coming to the ratio, it is 1:1500 for doctors and 1.7:1000 nurses in India. The WHO recommended ratio is 1:1000 doctors and 3:1000 nurses. We're running short in the scenario of human resources, but still we are fighting hard," he told Gandhi. "Private nurses are saying that their salaries are being cut. How will they care for their families during this pandemic? In such a situation, I think the government must help them and pay their entire salaries. In this condition, it is difficult for them to survive," he added.

Prior to Wednesday's chat, Gandhi's last conversation, as part of the series, was with former US diplomat Nicholas Burns on how the coronavirus crisis was reshaping world order. It was aired on June 12. As part of his dialogues with various experts, Gandhi has spoken to leading global economists Raghuram Rajan and Abhijit Banerjee; internationally renowned epidemiologist Johann Giesceke; global public health expert Ashish Jha and Indian industrialist Rajiv Bajaj.