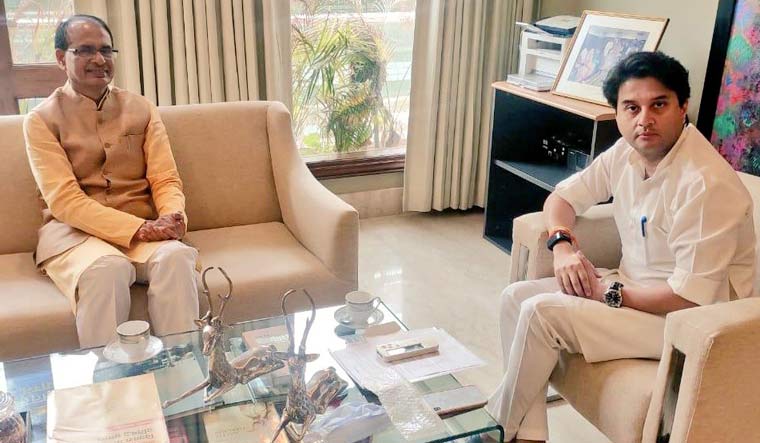 Suspense over expansion of the Shivraj Singh Chouhan cabinet in Madhya Pradesh continued till late Monday evening. Despite meeting all senior central leaders, including Prime Minister Narendra Modi in New Delhi, Chief Minister Chouhan has deferred his scheduled return to Bhopal in the night.

There were strong speculations that the five-member cabinet of Chouhan will be expanded on June 30 after discussions with central leaders. The CM was to return to Bhopal on Monday night. There were also rumours that Rajya Sabha member Jyotiraditya Scindia might accompany him back or arrive separately in Bhopal on June 30 to attend the likely oath taking ceremony as a number of his supporters are to be inducted in the cabinet.

However, things took turn differently on Monday evening in Delhi. The chief minister met the PM around 4.30 pm for half an hour at the PM House. He was expected to talk to the media after this meeting, but did not do so.

Sources said Chouhan was to hold another round of discussions with senior central leaders like Home Minister Amit Shah and national BJP president J.P. Nadda on Monday night and might come back to Bhopal on Tuesday morning.

Chouhan also met Rajya Sabha member Jyotiraditya Scindia earlier in the afternoon, where Scindia handed over a cheque worth Rs 30 lakh to Chouhan as contribution to CM Relief Fund.

There were indications that the complexities regarding selection of ministerial faces had been resolved at state level and central approval stamp was likely during CM’s Delhi visit. Things, however, seemed to remain unresolved till Monday evening.

In a sudden development, Madhya Pradesh Home Minister Narottam Mishra—a powerful leader of Gwalior-Chambal region where 16 Assembly seats are up for by-polls—reached New Delhi from Gwalior on Monday afternoon. This sudden visit fuelled speculations that some issues had cropped up about the selection of ministers. Mishra, however, did not accompany Chouhan on any of his visits.

There had also been reports that Anandi Ben Patel, the governor of Uttar Pradesh who has been given additional charge of Madhya Pradesh as MP Governor Lalji Tandon is ailing, might reach Bhopal on Monday afternoon. However this did not happen and there was no official confirmation on her proposed visit or its deferment.

Cabinet expansion in Madhya Pradesh that witnessed massive political turmoil three months ago has been hanging fire ever since Shivraj Singh Chouhan took over as chief minister of the state on March 23, just ahead of the nationwide lockdown due to COVID-19 pandemic. Though he inducted five ministers after almost a month on April 21, more inductions have remained pending—an issue raised time and again by the opposition Congress.

There have been constant talks about the issues surrounding the cabinet expansion and that the BJP is finding it very tough to balance between the new entrants to the party and its own leaders who are ministerial aspirants. As the number of slots available to the BJP old guard will be curtailed significantly due to inclusion of 10-12 Scindia supporters in the cabinet, the saffron party is finding it tough to find a balance, sources say. A maximum of 29 to 30 ministers are expected to be inducted at present in the cabinet, though the maximum limit is 35.