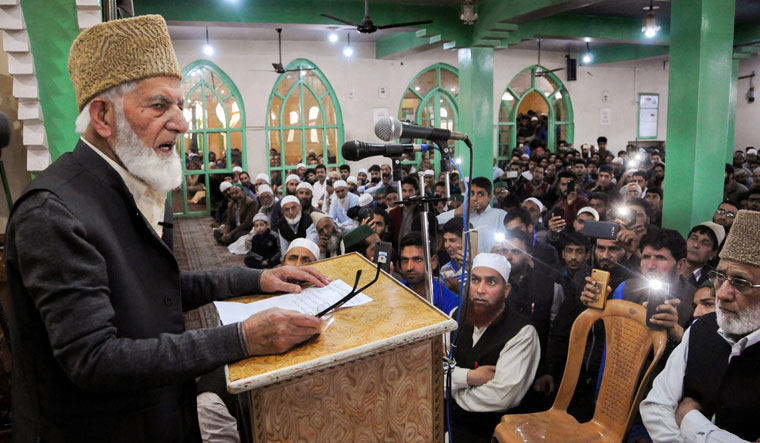 Pakistan ISI’s failed attempts to prop up veteran separatist leader Syed Ali Shah Geelani against Syed Salahuddin and the in-house machinations of the Geelani household led to letter bombs being dropped in the separatist fields of Kashmir valley on Monday. Geelani announced his decision to quit the All Party Hurriyat Conference (APHC), of which he was the chairman since 2003.

Security sources in New Delhi said there has been infighting in the APHC, which was tilting towards Salahuddin, and Geelani was gradually left with little option but to exert pressure.

Security officials said the ISI has been backing Geelani, and the recent attack on Salahuddin— who heads the alliance of pro-Pakistan terrorist groups called the United Jihad Council—was the first major indication of ISI’s frustration for being unable to carry out a major terrorist incident in Jammu and Kashmir post abrogation of Article 370.

The ISI-backed groups had also failed to garner enough support in Kashmir against India’s move. The growing voices of 'Independent Kashmir' as against accession were also a bigger worry for the ISI. Salahuddin was tilting towards this line, said security sources.

While Salahuddin luckily escaped the attack, the turn of events were troubling Geelani.

Geelani’s resignation seems to be his attempt to wrest control once again in the APHC and keep Salahuddin at bay.

Tensions have also been brewing due to the ISI funding the Lashkar-e-Taiba (LeT) and the Jaish-e-Mohammed (JeM) more than the Hizbul Mujahideen (HM). As LeT and JeM draw its cadres from Pakistan Punjabis and HM from Kashmiris, the ISI has started pumping funds into Jaish and Lashkar post abrogation of Article 370.

Meanwhile, security officials in New Delhi also see this as an attempt by Geelani not just to keep his cross border relevance alive but also to keep his legacy within the household. His letters seem to be a strong message to Pakistan that only the 90-year-old leader will be the final arbiter of his legacy which may go to one of his sons.

“Basically, Geelani was looking to foist his son as successor. This led to reactions from others. There has been much turmoil in the organisation for the last 2-3 months,” said a security official.

Notably, Nayeem Geelani, one of his sons and a doctor, was questioned by the National Investigation Agency in a terror-funding case in April 2019. Geelani’s son-in-law Altaf Ahmed Fantoosh was arrested in the same case and has been behind bars for the last three years. If not for his health, Geelani, too, could have been questioned in the terror funding case, said the official.