Russia as India-China mediator: How Soviets, Mao's China split over India in 1950s-60s

In September 1959, Khrushchev had a spat with Mao over China's treatment of Nehru 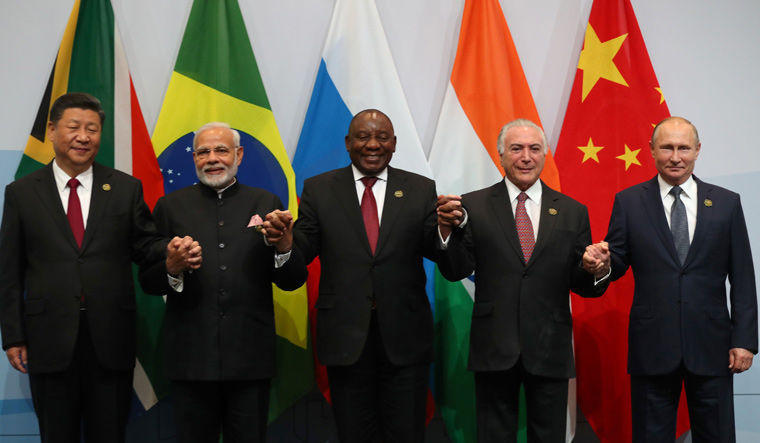 External Affairs Minister S. Jaishankar will today attend a virtual conference of the Russia-India-China trilateral, which is being held in the backdrop of a violent border clash between Chinese and Indian troops in Galwan Valley in eastern Ladakh. Chinese Foreign Minister Wang Yi and his Russian counterpart Sergei Lavrov will be the other two participants at the conference. Uncertainty had loomed over the meeting following the Galwan cross-border clash.

Twenty Indian Army soldiers were killed in hand-to-hand clashes with Chinese troops, in the biggest ever confrontation between the two sides after a gap of close to five decades. India has held China responsible for the "pre-meditated" action. The clashes significantly escalated the already volatile border standoff between the two neighbours.

In a telephonic conversation, Jaishankar had conveyed to Wang that the "unprecedented" incident in the Galwan Valley will have a "serious impact" on the bilateral relationship and said the "pre-meditated action" by the Chinese army was responsible for the violence.

Russia has already said that India and China should resolve the border dispute through talks and that a constructive relationship between the two countries was important for regional stability.

Simultaneously, Defence Minister Rajnath Singh is in Russia on a three-day visit to attend a military parade in Moscow which will commemorate the 75th anniversary of victory of Soviets over the Nazis in the Second World War. He is expected to meet top Russian military brass there.

Russia could very well emerge a key mediator in the deteriorating India-China relations. And it would not be a bad candidate, capable of influencing Beijing to a degree.

While India-Russia trade relations have certainly deteriorated when compared to the Soviet Union past, traditional energy and defence are major pillars (India purchased S-400 air defence systems from Russia notwithstanding US opposition). The emotional component of the past relations between the two countries is all but gone, but replacing it is a strong pragmatism born out of strengthening economic cooperation.

Amid sanctions from the West, Russia sees China as a massive market in energy and fossil fuels, and the duo had recently claimed they wanted to double their trade to over $200 billion by 2024. In the coronavirus era, the two nations have also formed an informal diplomatic bloc; Russia had criticised US pushback against China on coronavirus, calling them "baseless accusations". Russia had cited Hong Kong as an internal Chinese matter, and bailed out Huawei (when Chinese companies are being increasingly shunned in the West) by rolling out the red carpet for it in 5G mobile network development.

There are also historical parallels that can be drawn. Soviet Union was a key player in mediating the India-China border disputes which raged throughout 1950s and 60s. At the height of the Cold War, Nehru's India, though technically non-aligned, was closer to Soviet Union than it was to the US.

When Soviet Union broke with China

Around September 1959, Chinese soldiers attacked an Indian party in Ladakh; the People's Liberation Army killed over 10 soldiers and captured five, at a time when the border dispute was at its peak. The 1959 Tibetan uprising against China, and then escape of Dalai Lama to India, where he was given refuge, had majorly soured the relations between the two countries. A month later, Soviet premier Nikita Khrushchev visited China, where an argument erupted with Chairman Mao Zedong over the border incident. China was also enraged by fellow Communist Soviet's calls for "peaceful negotiation" between the two sides. The South China Morning Post, in 2017, reproduced a transcript of the conversation, where Khrushchev emphasised on the need to help Nehru stay in power:

Khrushchev: You have had good relations with India for many years. Suddenly, here is a bloody incident, as a result of which [Indian Prime Minister Jawaharlal] Nehru found himself in a very difficult position…If you let me, I will tell you what a guest should not say: the events in Tibet are your fault. You ruled in Tibet, you should have had your intelligence [agencies] there and should have known about the plans and intentions of the Dalai Lama.

Mao: Our mistake was that we did not disarm the Dalai Lama right away. But at that time we had no contact with the popular masses of Tibet.

Khrushchev: You were wrong to let the Dalai Lama go. If you allow him an opportunity to flee to India, then what has Nehru to do with it? We believe that the events in Tibet are the fault of the Communist Party of China, not Nehru’s.

Mao: No, this is Nehru’s fault.

What China perceived as Soviet support to India in its border issues with China (which ultimately resulted in the 1962 Sino-Indian War, where USSR refused to support China) was one of the reasons for the 1950s-60s Sino-Soviet split. There were multiple other factors at play.

After Josef Stalin's passing in 1953, cracks started to appear in the Communist bloc including China and USSR; Mao wanted leadership of the bloc, while Khrushchev considered himself a natural successor as the leader of a world superpower. There were ideological differences too. In the 20th Soviet Union Party Congress of 1956, Khrushchev publicly denounced of the policies of Josef Stalin, and began a period of what was known as 'de-Stalinisation', marked by policies of diplomatic pragmatism and co-existence with the West. China considered this revisionism, and kowtowing to capitalist powers. There were also differences over the ideological implementations of Marxism-Leninism; Mao prided himself for ideological purity and considered Khrushchev a reformist.

Khruschev, on his part, was wary of Mao's destabilising tendencies and publicly broke with it over the latter's pursuit of nuclear weapons. Relations between the Soviet Union and China steadily deteriorated over Xinjiang, Afghanistan, and so on, until the People's Republic of China (PRC) came to see USSR as a bigger rival than US. This resulted in US president Richard Nixon's much heralded visit to China in 1972, the first ever by a US president, and a normalisation of relations with the Western superpower thereafter.