The party submitted a complaint to the MP chief election officer 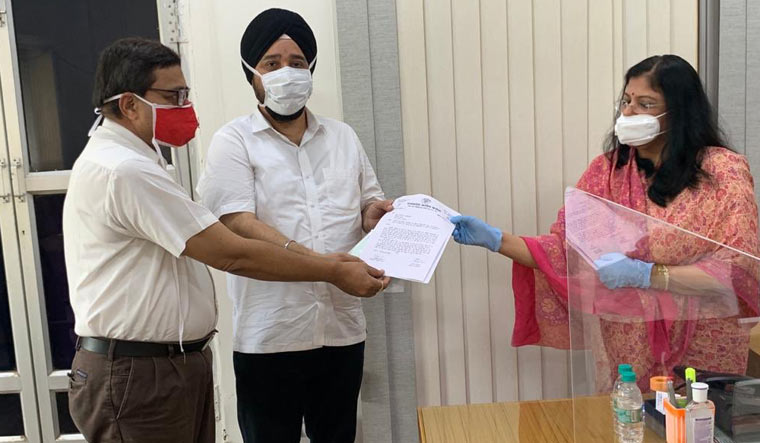 The Congress submitted a complaint, on the basis of the clip, to the Madhya Pradesh chief election officer Veera Rana

Citing the video clip of an interview of BJP national general secretary Kailash Vijayvargiya to a local media house in Indore, the Madhya Pradesh Congress alleged that Vijayvargiya has confessed to use of unfair means and violation of poll code of conduct in 2018 assembly polls for Mhow constituency.

The Congress submitted a complaint, on the basis of the clip, to the Madhya Pradesh chief election officer (CEO) Veera Rana on Tuesday, demanding declaration of election of Mhow MLA Usha Thakur as null and void. The party also demanded that Vijayvargiya should be debarred from poll campaigns as he said in the video that “good money was spent” for the election of Thakur.

The video clip, that has gone viral, shows Vijayvargiya purportedly speaking about the details of how Mhow assembly election was won in 2018. He is heard saying he requested the party leadership to give a ticket to Usha Thakur from Mhow after a survey showed negative sentiments for her in Indore-3 constituency (that she represented earlier) and assured the party that he will ensure that Thakur wins with a margin of over 10,000 votes.

It is to be noted that later, the ticket for Indore-3 constituency was given to Vijayvarigya’s son Akash, who won the seat.

He then goes on to say in the video that he spent ‘good money’ in Mhow without the knowledge of Thakur and would visit there regularly. “I had responsibility for the Malwa region and after returning home at night (during the election campaign) I would go to Mhow at 2am to do the setting there,” Vijayvargiya is heard saying.

In a memorandum handed over by Congress leaders Narendra Saluja, Kamal Nath and Bhupendra Gupta, the party sought to know what was Vijayvargiya doing at 2.00am in Mhow when the voters were already asleep—the election campaign ends each day at 10.00pm—and what kind of ‘setting’ was he speaking about?

Later, in a statement, Saluja said the video is a confession by Vijayvargiya that money and ‘setting’ was used in the Mhow election campaign in 2018 and therefore the election of the MLA there should be declared null and void.

Vijayvargiya could not be contacted for comments.