Leaves it to Odisha to decide, says state can stop yatra if situation demands 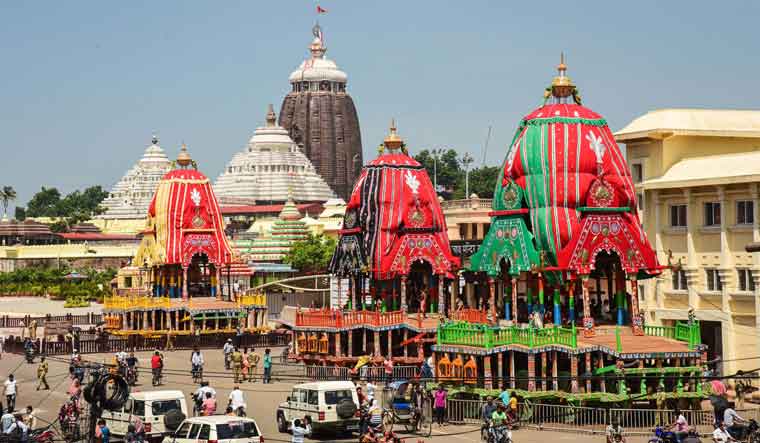 Chariots are seen ahead of the annual Ratha Yatra procession, in Puri | PTI

Less than a week after it stayed this year's Lord Jagannath Rath Yatra in Odisha's Puri, the Supreme Court on Monday modified its order saying the procession can be held with coordination from the temple's committee, state and Central governments, but without allowing devotees or compromising with health issues. The apex court, however, added that "the state can even stop the yatra or festivities if they feel it is going out of hand."

The new order was passed by a bench headed by CJI S.A. Bobde set up to hear pleas on Monday for holding of Puri Rath Yatra. The Supreme Court took up the matter on Monday as a few pleas had prayed the court to modify its June 18 order staying the yatra. "It is a matter of faith for crores. If Lord Jagannath will not come out tomorrow, he cannot come out for 12 years as per traditions," Solicitor General Tushar Mehta, who mentioned the matter before a bench headed by Justice Arun Mishra, had said in the morning.

The Puri Rath Yatra is attended by lakhs of people from across the world and is scheduled from June 23.

The apex court had on June 18 said that in the interest of public health and safety of citizens, this year's Rath Yatra, cannot be allowed and that "Lord Jagannath won't forgive us if we allow" it.  These applications, including the one filed by 'Jagannath Sanskruti Jana Jagarana Manch', had urged the court to allow the Rath Yatra.

While the Rath Yatra festival, held over 10-12 days with lakhs of people participating, was scheduled for June 23, the 'Bahuda Jatra' (return car festival) was fixed for July 1. Three heavily-built wooden chariots of Lord Jagannath, Lord Balabhadra and Devi Subhadra are traditionally pulled by thousands of devotees over a distance of three kilometres twice during the nine-day festival of the Trinity at Puri.

The application filed by 'Jagannath Sanskruti Jana Jagarana Manch' has sought modification of the June 18 order, saying the festival is deeply associated with the religious beliefs of millions of devotees of Lord Jagannath and it is "not impossible and impracticable" for the state and district administration to conduct the yatra by maintaining social distancing and following the Centre's guidelines.