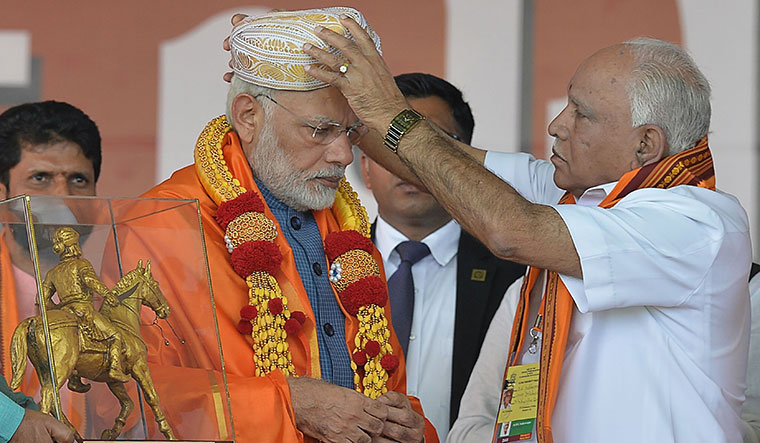 Prime Minister Narendra Modi is a "Kayaka Yogi" (ascetic engaged in selfless service), who has brought great reforms into a system that has corroded over the decades, according to Karnataka Chief Minister B.S. Yediyurappa, in Bengaluru on Monday.

Yediyurappa recalled the achievements of the Modi government and said that nearly 70 per cent of the people in the country wanted to see Modi not just complete his second term as the PM, but also to get elected for the next term, too.

"The first time Modi ji entered the Parliament, he prostrated on the steps and told people he would face the next elections based on the performance of his government. He came up with Jan Dhan, Ayushman Bharat, Mudra, neem-coated fertiliser, generic drugs, Startup India to name a few. The next election, we all saw the BJP bag 303 seats and the NDA with 353 seats to form the government. The Modi wave in Karnataka defeated stalwarts like Mallikarjun Kharge, K.H. Muniyappa and H.D. Deve Gowda, and the BJP swept 25 out of 28 seats," Yediyurappa said.

He also hailed Modi for taking up long-pending contentious issues during the second stint.

"Modi ji has been acknowledged as a world leader. A long-drawn legal battle culminated in the Ayodhya verdict owing to Modi ji's tact and patience. The abrogation of the Article 370, bifurcation of J&K and Ladakh as Union Territories, ban on triple talaq, amendment to Citizenship Act, portability of ration card, new motor vehicle act, launching of farmers'company income support scheme are bold decisions," Yediyurappa said.

The chief minister listed the various projects and schemes in the state being funded by the Centre. "This year alone, the Centre has given Rs 17,249 crore as grants, another Rs 10,079 crore towards centrally-sponsored schemes, and flood relief of Rs 1869 crore. As many as 49.12 lakh farmers are the beneficiaries under the Pradhan Mantri Kisaan Samman Yojana (income support of Rs 6,000 per annum), a fund of Rs 18,600 crore for 148-km-long suburban rail project, Rs 3,085 crore for Belagavi-Dharwad, Mysore-Kushalnagar, Shikaripura-Ranebennur rail projects and Rs 485 crore for railway workshop in Kolar," said Yediyurappa.

Hailing Modi's "decisive leadership" in dealing with the COVID-19, the CM said, "The pandemic has rattled even the most powerful of nations. But our PM has succeeded in tackling the challenge effectively with initiatives to protect the life and livelihood of the people. These efforts have been appreciated not only by the WHO but several other nations."

The chief minister claimed that it was the PM's call to convert the adversity into an opportunity that motivated the states to fight the virus and also become self reliant by manufacturing PPE kits, essential drugs and N95 masks.

The 20-lakh crore economic stimulus package aimed at making India self reliant is helping people of all sections overcome the economic crisis by creating of jobs locally, Yediyurappa said.