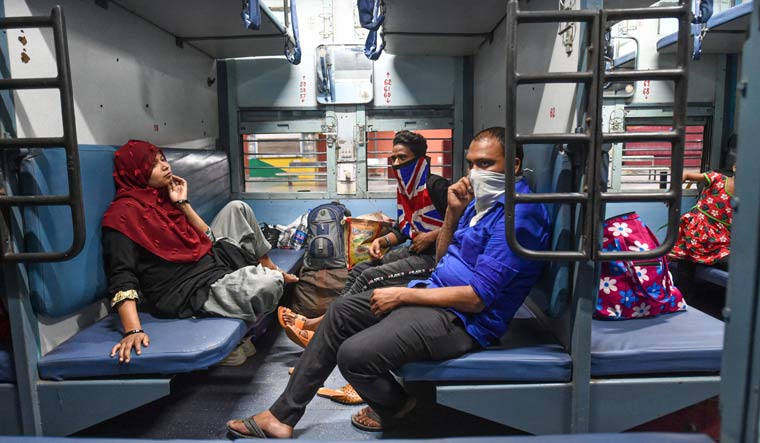 Passengers onboard a train at Charbagh railway station in Lucknow | PTI

There has been a steady decline in India's COVID-19 fatality rate which now stands at 2.83 per cent, much lower than in countries like the US, the UK, France and Italy, the Union Health Ministry said on Monday, even as India recorded 230 deaths and its biggest single-day spike of 8,392 cases in 24 hours.

India is the seventh worst-hit nation by the COVID-19 pandemic in terms of the number of infections, after the US, Brazil, Russia, the UK, Spain and Italy.

While the recovery rate in coronavirus infections is improving and has reached 48.19 per cent in India, there has been steady decline in the case fatality which is now 2.83 per cent, the health ministry said.

The case fatality rate is 2.83 per cent as against 6.19 per cent globally, the ministry said.

"A steady decline can be seen in the case fatality rate in the country. The relatively low death rate is attributed to the continued focus on surveillance, timely case identification and clinical management of the cases," the ministry said.

"Two specific trends are thus noticed, while the recovery rate is increasing on one hand, case fatality is going down on the other," it said.

The ministry also said that the testing capacity has increased in the country through 472 government and 204 private laboratories.

Meanwhile, a group of health experts, including doctors from the AIIMS and two members of an ICMR research group on COVID-19, has said community transmission of the coronavirus infection has been well-established across large sections or sub-populations in the country.

The government has maintained that the country has not yet reached the community transmission stage of the disease.

"It is unrealistic to expect that COVID-19 pandemic can be eliminated at this stage given that community transmission is already well-established across large sections or sub-populations in the country," the report said.

"The expected benefit of this stringent nationwide lockdown was to spread out the disease over an extended period of time to flatten the curve and effectively plan and manage so that the healthcare delivery system is not overwhelmed. This seems to have been achieved albeit after 4th lockdown with extraordinary inconvenience and disruption of the economy and life of the general public," the experts said in the report.

Of the 230 deaths reported since Sunday morning, 89 are in Maharashtra, 57 in Delhi, 31 in Gujarat, 13 in Tamil Nadu, 12 in Uttar Pradesh, eight in West Bengal, seven in Madhya Pradesh, five in Telangana, three in Karnataka, two in Andhra Pradesh and one each in Bihar, Punjab and Rajasthan.

The death toll has reached 51 in Karnataka and 45 in Punjab.

Jammu and Kashmir has reported 28 fatalities due to the disease, Bihar has 21, Haryana has 20 deaths, Kerala has nine while Odisha has reported seven deaths so far.

Himachal Pradesh, Jharkhand and Uttarakhand have registered five COVID-19 fatalities each while Chandigarh and Assam have recorded four deaths each so far.

Meghalaya and Chhattisgarh have reported one COVID-19 fatality each, according to ministry data.

More than 70 per cent of the deaths are due to comorbidities, according to the health ministry website.