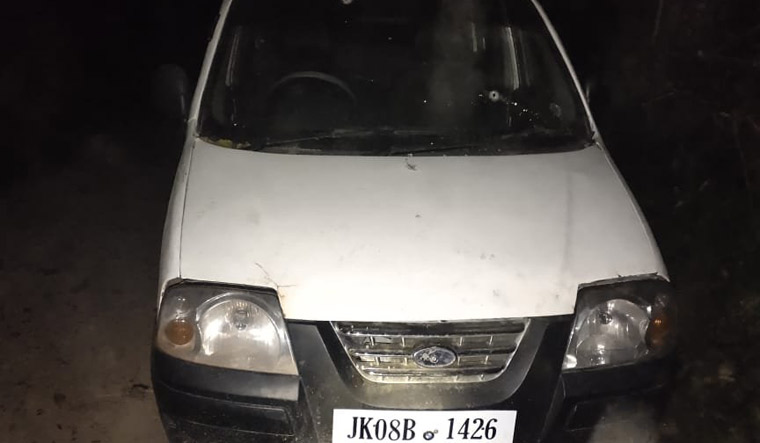 The Jammu and Kashmir police confiscated a vehicle laden with Improvised Explosive Devices (IEDs), thus averting a repeat of 2018 Pulwama suicide attack, in which more than 45 CRPF men were killed; the assailant abandoned the vehicle before escaping.

Inspector General of Police Kashmir Vijay Kumar told reporters in Srinagar that they had intelligence about a suicide attack on security forces by militants. The IED was fitted in a white Santro with a fake registration number.

“We had intelligence inputs, and special nakas (road interceptions) were put in place at various points,’’ Kumar said. “Our men stopped the suicide attacker at two naka points and fired warning shots.’’

He said the attacker jumped both interceptions and abandoned the vehicle at Ayegund area near Rajpora, Pulwama. He said, after dawn, the security forces found the vehicle and then called bomb disposal experts.

“After preliminary investigations, we found that the vehicle was laden with at least 40 to 45 kgs of explosive material which include ammonium nitrate, RDX and other materials,’’ he said. “Earlier, we thought it was about 10 to 15 kgs.” He said they concluded the explosive material was about 40-45 kgs as the vehicle went up in air 15 meters above the ground when the IED was destroyed.

He said Adil, a militant of Hizbul Mujahideen, and two others from Jaish-e-Muhammad were involved in the act. “They were planning the suicide attack on 17th of Ramadhan (Jang-e-Badr), but couldn’t do it due to our intensified operations,” the IGP said.

“Timely action by police, army and the CRPF in detecting and defusing the IED is laudable."

Sources said police forces are now trying to ascertain how the militants managed to procure the explosives.

In 2018, more than 45 CRPF men were killed after a suicide bomber of Jaish-e-Muhammad targeted a CRPF convoy at Lethpora, Pampore. The convoy was coming from Jammu to Srinagar to provide security for the Amarnath Yatra. India responded to the attack by carrying out  air strikes on Jaish-e-Muhammad camp at Balakote in Khyber Pakthoonkwa province of Pakistan on February 25.

The Pakistan Air Force retaliated, which led to an aerial clash and the shooting down of an IAF plane piloted by wing commander Abhinadan Varthaman, who was then taken prisoner by Pakistan. After India mounted pressure on Pakistan, Abhinandhan was released. The strikes helped the BJP win an absolute majority in Lok Sabha elections in May 2018.