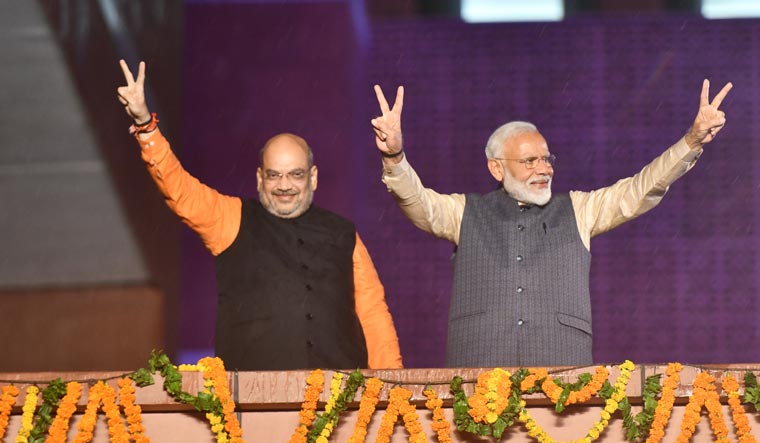 The BJP is going to hold a month-long campaign starting from June to mark the first anniversary of the Narendra Modi government, which won the 2019 Lok Sabha polls. The BJP will hold digital rallies in all districts across the country, its general secretary, Bhupendra Yadav, said.

Underlining that the BJP stood with the general public in the fight against COVID-19, Yadav said the party workers distributed 19 crore food packets and more than 4 crore packets of ration across the country.

Addressing the press via videoconference, he said, "Amid the corona crisis, the BJP workers were on the ground. They were serving people in all 909 organisational districts across the country and providing them all necessary help. Besides food, the party workers also distributed more than 5 crore masks, made people aware of Aarogya Setu app, motivated them to contribute in PM Cares fund.”

Talking about the first anniversary of the Modi 2.0 government, Yadav said, "The party will hold digital rallies across the country and all seven wings will also hold 500 digital rallies in their respective fields. BJP president J.P. Nadda will also address the party workers through Facebook Live on this occasion.”

“The party will reach out to people with a letter written by Prime Minister Narendra Modi talking about self-reliant India and achievements of the government and will distribute them in 10 crore families,” Yadav said.

It will be a month-long campaign starting from June, he said. When asked about the upcoming Bihar elections, Yadav, who is also the party's in-charge for the state, said it is for the Election Commission to decide when and how polls should be held.

"As far as the BJP is concerned, the party has been preparing for the elections and will use new technologies for campaigning and communicating with the people," he said.