Recovery rate improves to touch 50%; death rate goes down to 4.4% 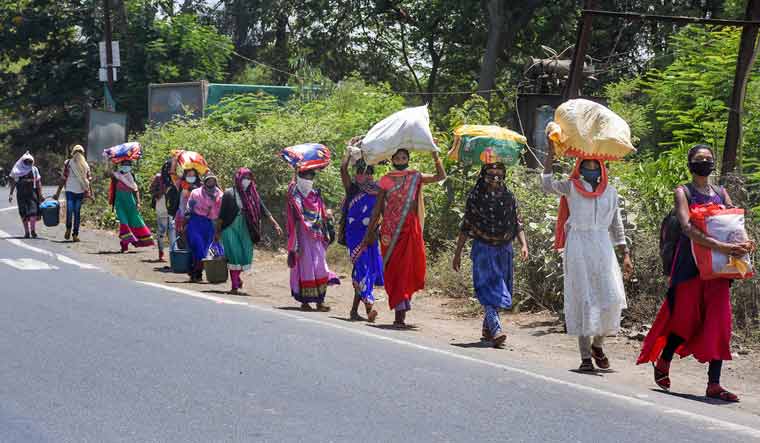 [File] Migrants from Madhya Pradesh walk along a road towards their native places during the nationwide lockdown, in Surat | PTI

Even as several relaxations have been provided in most of the districts across Madhya Pradesh during ‘Lockdown 4.0’, the COVID-19 infection has spread its tentacles to as many as 49 out of 52 districts in the state.

Also, the number of positive cases has crossed 6,000-mark to reach 6,170 as on Friday, a bulletin of the state health department showed. The death toll has risen to 272, of which 109 deaths are from Indore, 51 from Ujjain and 40 from Bhopal.

On May 18, the Madhya Pradesh government declared all but 10 districts in the state as green zones, with several relaxations. Also the rural areas of eight of the 10 red zone districts were declared as green zones. However, the number of districts with positive cases is on constant increase.

Save for Katni, Narsinghpur and Niwari districts, positive cases have been reported from all other districts of the state. The state government has claimed that the Agar-Malwa, Alirajpur, Anuppur, Chhindwara and Harda districts have become free of infection, with no positive cases now.

Health minister Narottam Mishra has said that the spread to new districts is because of influx of migrant laborers from other states during the past few days. According to government figures, over 5 lakh labourers have returned to the state during past few days on trains and buses only. The figure could be far higher as many labourers have returned on foot or using other means.

Meanwhile, Chief Minister Shivraj Singh Chouhan, during a review meeting on Friday, directed the officials to ensure that the spread of the infection was stemmed. He has directed that health screening of the migrant workers returning to various districts should be done mandatorily.

Chouhan said that the district administrations should work very cautiously to prevent the spread. He also urged people to celebrate Eid festival at home and maintain physical distancing.

Pointing out a spike in cases in Mandsaur district, the chief minister said that proper steps should be taken to stem the infection rate and warned that any negligence in this regard will not be tolerated.