The parties listed out 11 demands to the Centre 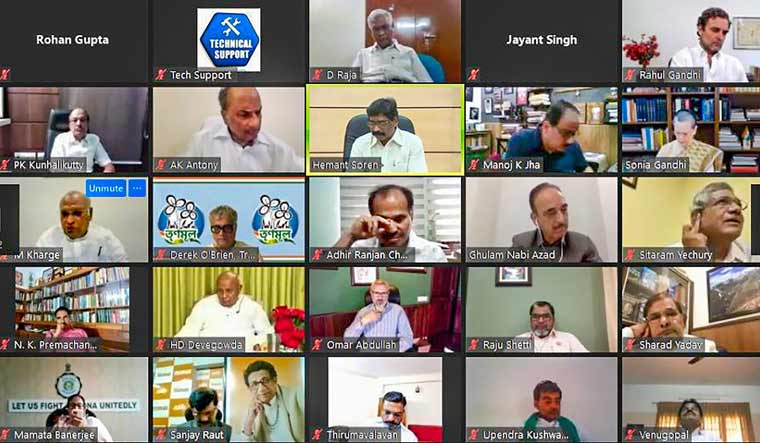 In a first of its kind effort during the COVID-19 crisis, the opposition parties came together on Friday to launch a concerted attack on the Narendra Modi government, accusing it of “unabashedly” usurping the powers vested in states.

A total of 22 like-minded parties attended a virtual meeting convened by Congress president Sonia Gandhi to discuss the crisis caused by COVID-19, the Centre's policies with regard to the pandemic and its socio-economic impact.

In a statement issued at the end of the four-and-a-half hour-long meeting, which was also attended by three chief ministers and heads of various regional outfits, the parties said the Union government has “unabashedly usurped powers vested in the states, undermining the constitutionally guaranteed federal democracy.”

Underlining that they represent over 60 per cent of the population, the parties said, “This is neither the time for government at the Centre to indulge in showmanship nor one-upmanship. This is the time for a gigantic collective endeavour. This is what the people of India need, and this is what the people of India demand. It is important that the government of India reaches out and engages in a dialogue with all political parties in a systematic manner.”

They also urged the government to activate parliamentary institutions like standing committees and be sincere in helping the states financially and otherwise.

The opposition parties listed out 11 demands to the Centre, and topping the list was direct cash transfer of Rs 7,500 per month to all families outside the income tax bracket, for six months. They said Rs 10,000 should be paid immediately, with the balance paid equally across the remaining five months.

Other demands include free distribution of 10 kg foodgrains to all needy individuals each month for the next six months, increase the number of MGNREGA workdays to 200 and provide the necessary budgetary support and free transportation for all migrant workers to their native places.

Amongst the demands are making immediate and reliable arrangements to rescue all Indian students and other citizens stranded overseas, providing accurate and relevant information on COVID-19 infections and goalposts vis-a-vis testing, infrastructure and containing spread.

The parties demanded a reversal of all unilateral policy decisions, particularly the annulment of labour laws.

It was demanded that the Centre should immediately procure the rabi harvest at the MSP and provide assistance for the produce to reach the market. The parties said the government must also provide seeds, fertilisers and other essentials to the farmers to help prepare for the kharif crop.

They asked the Centre to release substantial amounts of funds to the state governments who are in the frontline of combating the pandemic.

It was stressed that the Centre should communicate in clear terms the exit strategy from the lockdown if any.

They demanded the restoration of parliamentary functioning and oversight with immediate effect.

It was also demanded that the Centre presents a clear and meaningful economic strategy focused on revival and poverty alleviation instead of propaganda. The parties said the Rs 20 lakh crore package and its contents mislead the people of India and demanded that the government presents a revised and comprehensive package that will be a true fiscal stimulus in order to stimulate demand in the economy.

The parties said the state governments should be consulted while allowing international or domestic flights.

Amongst the leaders who attended the meeting were three chief ministers from non-BJP ruled states—West Bengal Chief Minister Mamata Banerjee, who has attended an opposition meeting after a long time, Maharashtra Chief Minister Uddhav Thackeray, who was present at a meet of the opposition bloc for the first time, and Jharkhand Chief Minister Hemant Soren.

Invitations were sent out to the Uttar Pradesh parties, the BSP and the SP, who decided to stay away, while the AAP was not invited.