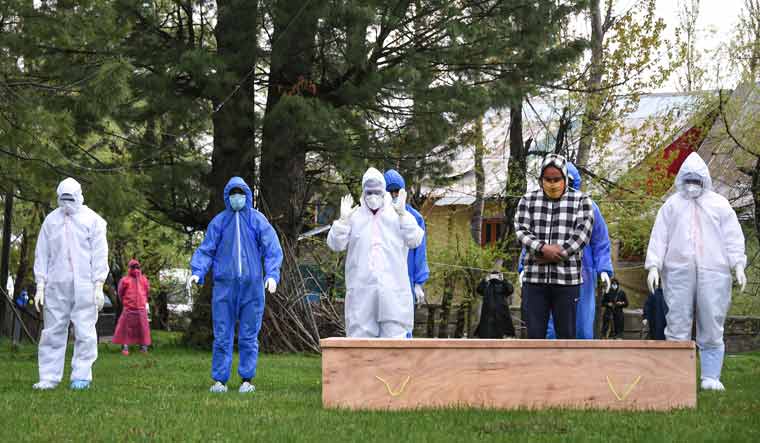 (File) Villagers offer funeral prayers in front of the mortal remains of a man who died due to COVID-19 at his ancestral graveyard during a nationwide lockdown, at Tangmarg in Baramulla, north Kashmir | PTI

Three people have died in Jammu and Kashmir due to COVID-19, taking the toll to 15 in the Union Territory.

A 65-year-old woman from Souch in Kulgam became the latest casualty of the virus that has infected over 1,100 people in the Union Territory.

According to the nodal officer for COVID-19 at Government Medical College, Dr Salim Khan, the deceased had tested positive for COVID-19 and died of a heart attack at the Chest Disease (CD) hospital on Monday.

He said she was admitted to the surgical ICU at SHMS hospital for subdural haemorrhage, and was brought back to CD hospital after her sample tested positive.

Earlier, a 75-year-old man from Hillar in Anantnag died of the infection at CD hospital in Srinagar.

After testing positive for COVID-19, he was admitted to the CD hospital.

After several days of hospitalisation his two successive samples had returned negative.

He was then shifted to SMHS hospital for tracheostomy, an emergency procedure for creating an opening in the neck for a tube to allow the entry of air in the lungs.

He was tested positive again after doctors took a sample of his naso-oropharyngeal swab and was shifted back to CD hospital, where he died.

Yesterday, a 29-year-old woman died due to COVID-19, at the CD hospital. The deceased was a resident of Habba Kadal in Srinagar.

Jammu and Kashmir authorities have mobilised medical and administrative staff on a war footing.

Quarantine facilities have been set up for COVID-19 suspects with travel history and contacts of those who have tested positive.

Several people in the quarantine have complained of inadequate facilities at the government-managed quarantine centres like hotels and other buildings.