COVID-19 lockdown will most likely be extended till April-end 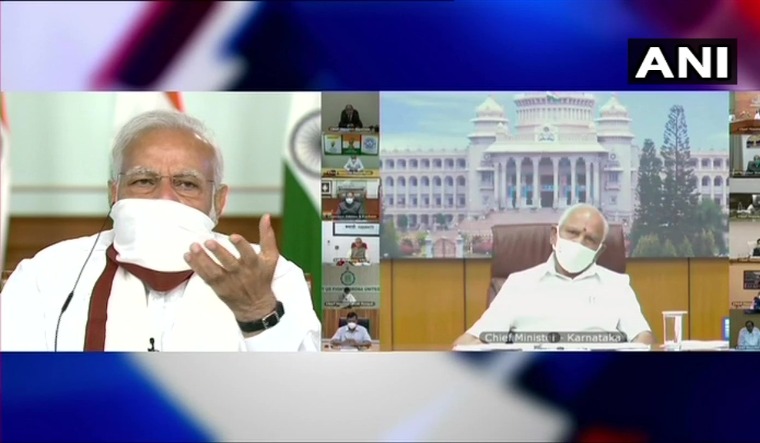 The nationwide lockdown to contain the deadly coronavirus looks set to be extended by two more weeks till April-end after a consensus emerged among states on Saturday for continuing the curbs. The tally of confirmed infections crossed 7,500, with 242 deaths so far.

The Centre is likely to categorise the entire country into red, orange and green zones depending on the number of COVID-19 cases and might allow limited services to function in safe zones and virtually restrict all activities in the high-risk areas. Schools and colleges may remain closed everywhere, but small scale industries and liquor shops may be allowed to open.

While Prime Minister Narendra Modi asked state governments to take steps to curb the lockdown violations and ensure adherence to social distancing, he also announced a shift in focus from 'Jaan hai to jahaan hai' (health is wealth) to 'Jaan bhi, jahaan bhi' (lives as well as livelihoods), which many saw as indications towards relaxations for certain economic activities, including for industrial and agriculture sector. The next 3-4 weeks would be critical to determine the impact of steps taken till now to curb the virus spread, Modi told the chief ministers.

So, what exactly have different states demanded from the Centre?

Rajasthan Chief Minister Ashok Gehlot on Saturday told Prime Minister Narendra Modi that the Centre should come up with a 'Food for Work' scheme as a social safety net for the poor in the wake of the COVID-19 lockdown. While participating in the video conference, Gehlot said that the decision on the extension of the lockdown should be taken after taking all the states into confidence. The CM pointed out that the ongoing lockdown poses a threat to the livelihood of the ragpickers, hawkers/rickshaw pullers, nomads and other helpless people. In such a situation, the Centre should consider revamping a scheme on the lines of 'Food for Work'. Food grains are available in bulk with the central government for the operation of such a scheme, he said in a statement.

Gehlot said that the proposed scheme was earlier introduced during a famine-drought under the tenure of then Prime Minister Atal Bihari Vajpayee in 2002 and proved to be very popular and successful. Gehlot said that the Rajasthan government has provided an ex-gratia amount of Rs 2,500 to more than 31 lakh families of the poorer sections who do not come under the purview of social security pensions. The Centre should also devise a similar scheme of ex-gratia payment for this category of people so that they can get financial support, he said.

The Jharkhand government is on the horns of a dilemma over the coronavirus lockdown as extending it would lead to financial distress and lifting it could trigger an exodus of migrants into the state, Chief Minister Hemant Soren told PM Modi during the interaction. Soren said his government is expecting over 5 lakh migrant labourers to return to their villages once the lockdown is lifted, increasing the possibility of the spread of the deadly virus. But continuing with the lockdown will further dry up the state's revenue, he added. "Whether the lockdown is lifted or extended, it is a difficult situation for us from both ways. As per our data, a large number of labourers are stranded in states severely affected by the coronavirus outbreak. When they will return, the situation could deteriorate. They may come as carriers of the virus," Soren said. He said over 1.5 lakh migrant workers have already returned to Jharkhand and had to be quarantined.

Supporting continuing curbs beyond April 14 for two more weeks, Chief Minister Edappadi K. Palaniswami on Saturday conveyed to Prime Minister Narendra Modi that train and flight services should not be resumed and stressed the importance of smooth supply of essential commodities. In a meet via a video link with Modi to discuss the COVID-19 situation, Palaniswami sought 2 lakh test kits from the Centre, additional funding to aid unorganised sector workers and farm labourers, besides Rs 2,000 to each of their families if the lockdown is to be extended by the Centre.

He wanted the Centre to announce a special package for agriculture and horticulture promotion. Briefing reporters about the video conference and a subsequent Cabinet meeting, Chief Secretary K. Shanmugam said several Chief Ministers opined that under the present circumstances the lockdown should be extended and if not, all efforts taken so far to check COVID-19 will fail. Also, he reiterated a number of measures like nod for additional borrowing of 33 per cent above the permitted level for fiscal year 2019-20 may be allowed for 2020-21 for combating the pandemic.

Madhya Pradesh Chief Minister Shivraj Singh Chouhan told Prime Minister Narendra Modi that he was not in favour of the withdrawal of the ongoing coronavirus lockdown, which ends on April 14, in his state. Chouhan shared his views on continuation of the restrictions during the PM's meeting with chief ministers which was conducted through a video conference. "Today we are not in favour of removal of lockdown. It should not be removed now. Life of the people is more important and to save it the lockdown is necessary," Chouhan's spokesperson quoted the CM as telling Modi. Madhya Pradesh reported 470 COVID-19 cases till Friday night and 40 deaths.

Manipur Chief Minister N. Biren Singh on Saturday requested Prime Minister Narendra Modi to take action for stopping racial slur and harassment that the people of the northeastern region are facing in different parts of the country amid the coronavirus crisis. During a video conference, Singh urged the PM to direct the states to do the needful to stop harassment of NE people. He appealed to other chief ministers to take care of the 30,000 Manipuri people who are stranded outside the state because of the lockdown. A list of stranded Manipuris with addresses where they are putting up is being forwarded to the states concerned, he said. He also pleaded the prime minister to make arrangements for bringing all the stranded people of Manipur to their home. The chief minister said his government is also looking after the requirements of people of other states stuck in Manipur. Regarding the state's preparedness to contain the spread of COVID-19, Singh said 3,200 beds have been kept ready for quarantine, while one dedicated block of 50 beds in two hospitals each is earmarked for Covid-19 patients.

Amid the coronavirus-induced lockdown, a war of words broke out between the Centre and the TMC government in West Bengal, with the Home Ministry accusing the state of "gradual dilution" of curbs and Chief Minister Mamata Banerjee retorting the country is not fighting any "communal virus" but a disease. The home ministry on Saturday objected to what it called was a "gradual dilution" of lockdown in West Bengal, and said shops of non-essential goods were allowed to open in the state and the police granted permission to religious gatherings. In a communication to the chief secretary and the DGP of West Bengal, the ministry also said there was no regulation in vegetable, fish and mutton markets in many areas, including Rajabazaar, Narkel Danga, Topsia, Metiaburz, Gardenreach, Ikbalpur and Maniktala, where social-distancing norms were violated. Most of these localities are minority-dominated, and the state BJP unit has repeatedly alleged that lockdown was not properly enforced in such areas.

Kerala's stand on the nationwide lockdown is that it should be lifted in a phased manner and the state is prepared to accept all restrictions proposed by the Centre beyond April 14. Briefing reporters on details of the discussions with Prime Minister Narendra Modi during the video conference with chief ministers, Vijayan said he had also sought the centre's intervention to operate special flights to to bring back Keralites stranded due to the lockdown in various countries where they had gone on a visiting visas. Vijayan also wanted all Indian embassies to issue medical bulletins to allay the fears of expats. "We presented our demands before the centre. We have said we will accept all restrictions to be imposed by the centre after April 14.

The prime minister also said that we need to be more careful in the coming weeks", Vijayan said. The state had suggested that it was not ready to go back to the pre-lockdown situation. The Chief Minister said there was a possibility of community spread if uncontrolled public travel is allowed in Kerala, which has a high population density. Kerala, he said, also suggested that restrictions in the seven hotspots, Kasaragod, Kannur, Kozhikode, Malappuram, Thrissur, Ernakulam and Thiruvananthapuram, which accounts for most of the cases from the state, continue till Apr 30.