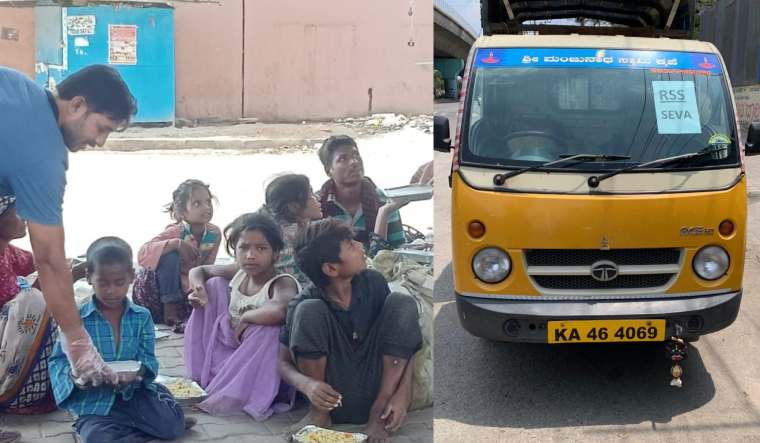 Volunteers distribute food and ration to the poor in Karnataka; An 'RSS Seva' vehicle used to distribute the items

Karnataka Pradesh Congress Committee (KPCC) chief D.K. Shivakumar on Thursday accused the ruling Bharatiya Janata Party government of trying to garner political gains by selectively allowing only BJP and RSS volunteers to distribute food and ration to the poor during the current lockdown.

Shivakumar, who addressed a press meet at his residence in Bengaluru, demanded that Prime Minister Narendra Modi and Chief Minister B.S. Yediyurappa should convene an all-party meeting to discuss strategies to tackle the COVID-19 outbreak.

“Some BJP workers have set out to exploit the lockdown situation. They are collecting donations in the name of RSS. They are giving away five kilo rice, sugar, oil and salt to daily wagers and migrant workers who have been deprived of livelihood. We are opposed to this," said Shivakumar, adding that the Congress with its huge cadre base had abstained from reaching out to the poor only to comply with the 21-day lockdown announced by the prime minister.

“On one hand, the police are resorting to lathicharge against the common man violating the lockdown. On the other, we see RSS volunteers out on the streets collecting donations and distributing food and ration to the poor. Who gave them the permission? Even we all are raring to reach out to the poor,” Shivakumar said, urging the state government to give permission to other organizations too.

“Our party workers are also enthusiastic to volunteer. Let the government permit all organisations who want to volunteer and devise a method to streamline it,” he added.

Slamming the Centre for failing to consult the leaders of other political parties,  Shivakumar said,  “The coronavirus outbreak is not just the BJP’s problem. It is the country's problem and is the question of humanity. This state is not your property. You must set an example by taking everybody into confidence. Just don’t make announcements. Inform the common man how to avail the assistance. You must work out the logistics.”