“This disease doesn't discriminate between rich and poor,” he said 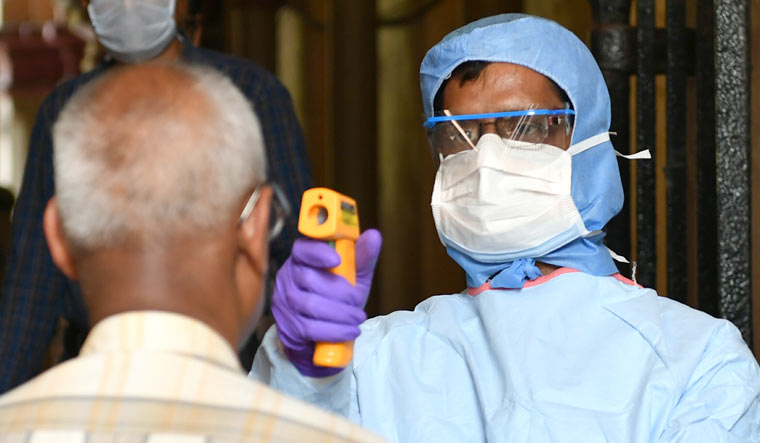 People being screened at the Calcutta High Court | Salil Bera

Addressing people of Varanasi via a video link, Prime Minister Narendra Modi reiterated that social distancing and staying indoors were the only way out and the best option to deal with coronavirus. "Around one lakh people infected with coronavirus are recovering, this also needs to be highlighted," he said. "People should focus on how deadly this virus is. This disease doesn't discriminate between rich and poor," the prime minister said, a day after he announced a 21-day nationwide lockdown to try halt the spread of the coronavirus. The lockdown came into effect from Tuesday midnight.

Coronavirus cases in the country crossed 600 on Wednesday as authorities beefed up preparedness to fight the pandemic with the Army ordnance factories and central paramilitary forces earmarking over 2,000 beds in their chain of hospitals for isolation and treatment of people affected by COVID-19. In addition, the Hamirpur district administration in Himachal Pradesh took over all the ten hostels with 2,000 rooms of the National Institute of Technology (NIT) for creating an isolation centre. A 2,200-bed state-run hospital in Kolkata has stopped admitting new patients who are suffering from other diseases and was discharging patients whose condition had improved as part of efforts to create a dedicated isolation centre.

Nearly 90 more coronavirus positive cases were reported in India taking the total number of cases to 606 on Wednesday while the number of deaths was 10, according to health ministry data. The number of active COVID-19 cases stood at 553 while 43 people have been cured, discharged or migrated. The 606 positive cases includes 43 foreign nationals, the ministry said. On Tuesday, the number of cases was 519. The death toll due to the virus increased to 10 with another death being reported from Maharashtra, according to the data. In its updated figures at 6.45pm on Wednesday, the ministry stated that Maharashtra has reported three deaths and one death each was reported from Bihar, Karnataka, Gujarat, Punjab, Delhi, West Bengal and Himachal Pradesh.

Prime Minister Narendra Modi announced a complete nationwide lockdown for 21 days from Tuesday midnight, asserting in an emotional appeal "with folded hands" that unless India's 130 crore people practise social distancing, the country will lose the war against coronavirus outbreak and slide back 21 years.