UP: Anti-CAA women protesters refuse to back down despite COVID-19 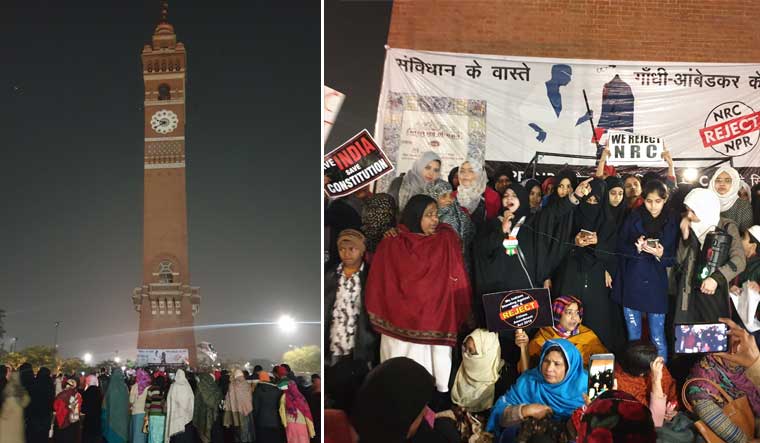 Despite the COVID-19 pandemic and numerous appeals by the government and activists to stop their sit-in protest, the women anti-CAA(Citizenship Amendment Act) protesters of Lucknow have refused to back down.

There are two protest sites in Lucknow—one at the Hussainabad Clock Tower and another at Ujariyaon village. The women have issued an appeal demanding that if the government is really serious about dealing with the coronavirus, it should take back the unconstitutional CAA. They have also demanded written assurances that the NPR (National Population Register) and the NRC (National Register of Citizens) will not be implemented. The other demand is to take back all the cases filed against those who they have labelled ‘defenders of the Constitution’.

In addition to the appeal, the women are also circulating messages about how to remain safe during the protests. Injunctions include, one-metre distance between protesters, no more than 50 protesters at a time, mandatory wearing of masks, using sanitisers before coming to the protest site and not bringing the elderly and children to the protest.

Their slogan of choice now is, 'Hum corona aur NPR dono se ladenge' (We will fight both coronavirus and the NPR).

The women’s refusal to recognise the repercussions of the pandemic have angered many within the protesters. One such protester told THE WEEK, “We are being played by the men. If they have the courage, they should take over the sit-in now.”

Another activist, who has been at the forefront of the protests, told THE WEEK, “I have appealed to them to call off the protests. But the women refuse to listen. They could retreat now and utilise their time constructively. For instance, making sanitary napkins for the women who have been left homeless by the Delhi violence.”

Two strong strand of thoughts run deep through the protesters. One is that if they were to abandon the sit-in they would be sent to detention centres. The second is that a withdrawal would seem like a defeat and undo whatever they have achieved since January 17 when the protest at the Clock Tower started.

Mohammed Shoaib, the chairperson of the Rihai Manch, who was jailed in the aftermath of the protests despite being under house arrest when the violence broke out in Lucknow on December 19, went to meet the protesters on Thursday night to receive what he perceives as a ‘frosty reception’.

“They told me who are you. We don’t recognise you and why must we listen to you. The protests were started by women and they continue to lead it. Nobody has any influence over them”, he said.

Activists pleading for a back-off are also worried that the government, having managed to paint the protests as a Muslim reaction, will be content to make the sectarian divide deeper by having the protests linger.

Deepak Kabir, another jailed activist who has been served a recovery notice by the district administration, said, “A retreat at this point is not a defeat. This protest has achieved so much. It has showcased the leadership skills of women, it has brought international attention to an unjust law. But a physical protest has its limits. It is time to withdraw and restrategise. We are battling against a virus which knows no boundaries. We must stay safe to fight another day. This is anyway a long battle”.