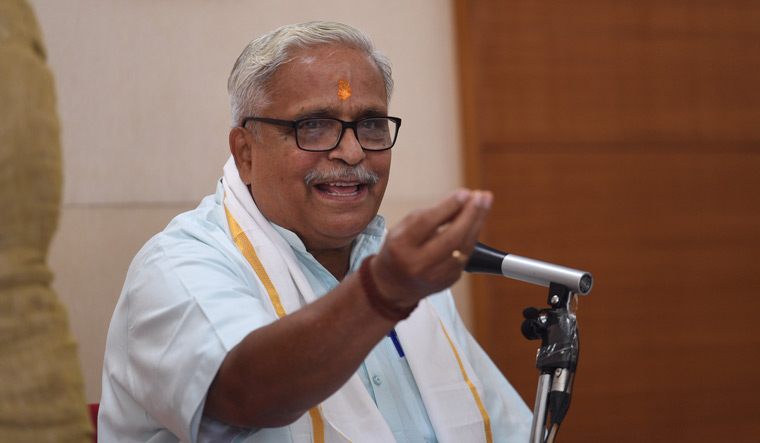 The Centre is duty-bound to convince the state governments on the Citizenship Amendment Act (CAA), National Population Registry and National Register of Citizens, said RSS sarkaryavah Suresh 'Bhaiyyaji' Joshi said during a during a press meet held in Bengaluru on Monday.

Pointing out that there is a need for discussion on these issues, he said as the ruling party, the BJP should take the initiative to hold discussions with all the political parties.

Announcing the three resolutions passed by the Akhil Bharatiya Karyakari Mandal (ABKM) on CAA, the Supreme Court verdict on Ram Janmabhoomi issue and abrogation of Article 370, Joshi said, "CAA, a national issue was turned into a political issue by many leaders of the political parties to create imaginary fear and confusion in the society. All political parties should honestly think about it and support whatever is in the interest of the nation. Despite several appeals by Prime Minister Narendra Modi and Home Minister Amit Shah, some forces are trying to mislead people. Many organisations have come forward in support of the CAA and Sangh stands with them."

In its resolution, the ABKM congratulated the Parliament and the Union government for passing the CAA for "simplifying the process" of granting citizenship to Hindus, Sikhs, Buddhists, Jains, Parsis and Christians who fled the neighbouring Islamic countries—Bangladesh, Afghanistan and Pakistan— owing to religious persecution.

ABKM called it the "moral and constitutional obligation" of the Indian society and the government to protect the interests of the persecuted minorities in the three Islamic neighbouring countries as they had significantly contributed towards preservation and nourishment of the Indian culture and the Freedom Struggle.

"Bharat was partitioned on the basis of religion in 1947, and both countries assured safety, honour and equal opportunities to the minorities on their respective sides. While India has fully protected the interests of minorities, the countries formed after their separation from India did not do it despite the Liaquat–Nehru Pact. The minorities in those countries suffered a new form of slavery with continuous incidents of persecution, grabbing of their properties, atrocities against women, and their government encouraged the persecution through discriminatory policies and unjust laws. A clear testimony to this is the sharp decline in the population percentage of minorities in those countries," read the resolution.

Stating that the government, during the debate in Parliament and after that clarified that CAA would not affect any Indian citizen and had made provisions to allay the apprehensions among the people of the northeastern region, ABKM alleged that the "Jihadi-Left combine" with the support of selfish political parties indulging in communal politics and some foreign forces, were trying to destroy communal harmony and national integrity.

"We condemn such activities and demand the Centre to thoroughly investigate and take action against the forces trying to spread violence and anarchy in the country, " said the resolution.

'Abrogation of Article 370 was bold'

Lauding the Union government for "extension of the Indian Constitution" to Jammu and Kashmir through abrogation of Article 370 and reorganisation of the state into two union territories, ABKM said the Centre and political parties should be appreciated for supporting the "bold and historical" step. While the RSS praised the "statemanship and political will showed by Prime Minister Narendra Modi and his team,” it also urged the government to initiate the process of secure and dignified rehabilitation of the displaced Hindu community from the Kashmir valley at the earliest.

The resolution pointed out that the temporary provision of Article 370 was added to the Constitution due to the "immediate and exceptional circumstances of aggression" from the Pakistan side soon after partition. Later, under the garb of Article 370, a large number of articles of the Constitution were either excluded or extended in amended form for the state of J&K. Article 35A inserted arbitrarily through Presidential orders had sown the seeds of separatism, leading to discrimination against socially disadvantaged groups like SC/ST, OBCs and women. Jammu and Ladakh regions were deprived of proportional representation in the state assembly and allocation of resources. Wrong policies led to ‘radicalisation and terrorism,” the resolution stated.

"We believe abrogation of Article 370 is in line with the 'one nation, one people' concept, which aligns with our Preamble too," said Joshi.

Paying tributes to the martyrs who laid down their lives fighting separatism and terrorism, ABKM stated that after Maharaja Hari Singh completed the process of integration of the state with India by signing the ‘Instrument of Accession’, many from the nationalist forces, and satyagrahis of the Praja Parishad Andolan had sacrificed their lives fighting for the national integrity and dignity of the national flag.

Hailing the Supreme Court verdict on Ram Janmabhoomi on November 9, 2019, as "momentous verdict" in the judicial history, and the Ram Mandir at Ayodhya as a "national pride", ABKM expressed happiness over the entire country treating the verdict as the victory of the nation, justice and the Constitution.

“The struggle for Sri Ram Janmasthan Mandir is unique amongst the greatest and protracted struggles in world history. Lakhs of Ram bhakts have sacrificed their lives in the course of this continuous struggle since 1528. At times, this struggle was inspired by some great men and at other times, it was spontaneous. The legal battle that had begun in 1950, and the mass movement that began in 1983, continued till their successful conclusion. We pay tributes to all martyrs, " stated the resolution.

Applauding the government for its handling of the issue, ABKM also stated that in accordance with the direction of the Supreme Court and the sentiments of Ram bhakts, the constitution of a new trust, Sri Ram Janmabhumi Teerth Kshetra, as a society-driven trust instead of making it government controlled one and confining the role of the government to that of a facilitator only reflects on the farsightedness of the government. It also expressed hope that the Ram Janmabhoomi Nyas would build the grand Ram mandir and parisar kshetra at the earliest.