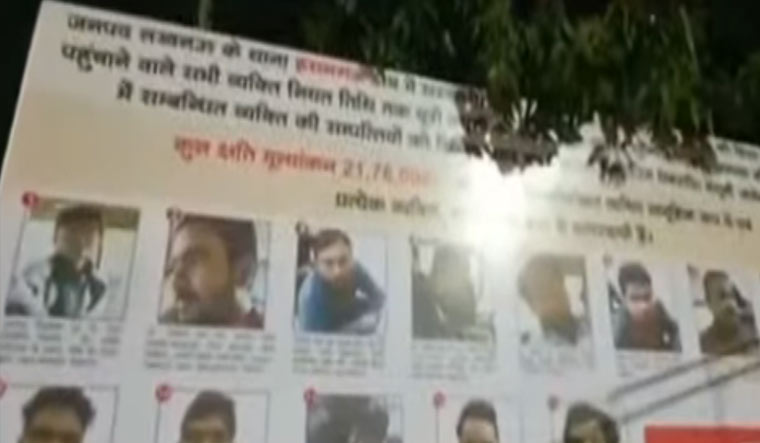 An FIR has been lodged in Lucknow against the offensive language used against the judges of the Allahabad High Court who had directed the state government to remove the hoardings with photographs, names and addresses of anti-CAA protesters who were issued recovery notices by the district administration.

Filed by social activist Nutan Thakur, the report calls for action under Section 66 of the Information Technology (Amendment) Act 2006. The said section deals with offensive messages through a computer or any other communication device like a mobile phone or a tablet. The report also calls for action under Sections 500 (punishment for defamation) and 507 (criminal intimidation through anonymous communication) of the Indian Penal Code, 1860.

The FIR reads, “In our democratic system, constructive criticism of any judicial proceeding or order is acceptable…(but) the language and words used in this case are unacceptable and deeply objectionable”. It draws attention to hashtags which have been trending on Twitter in the wake of the court’s order pronounced on March 9. Among these are #Justitutes #BehaveJustitutes #AndhaKanoon (blind justice) and #Dogalapanti (double standards).

The report calls attention to an article on opindia which spoke about #justitutes being a top trend on Twitter. The said article was posted on March 10 but is no longer available on the website. This is a website that had its Twitter account locked down for reporting stories on Hindu victims of Delhi riots, as these stories were perceived as ‘hateful conduct’. The website had, on March 13, posted a piece with the strap line, ‘This is not the first time Twitter has tried to suppress voices of those from the right-wing ideology’.

The FIR points out to social media comments such as that the Allahabad High Court judges do not deserve to be addressed as ‘My Lord’, comments accusing the court of being biased towards a particular religion and abusing Chief Justice Govind Mathur for being a member of the Student’s Federation of India.

In her report, Thakur said she has screenshots of many of the social media comments and added that these have been forwarded on different platforms to incite people against the judiciary. It labels the criticism, ‘objectionable, rude, unwarranted, non dignified and casteist’.

Though the FIR was lodged on the night of March 12, Thakur said the police have not contacted her for collection of evidence. “If the police do not contact me, I will submit the evidence I have on my own. Under the IT Act, after six months, evidence becomes untraceable. While it was my duty to lodge the FIR, investigation has to be conducted by the police.”