Loss of livelihood is a major concern 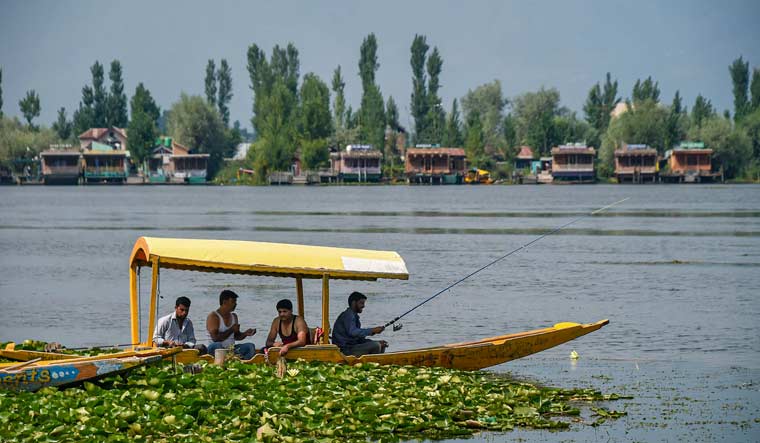 A Kashmiri man casts his fishing road as he rides in a shikara along with others, at Dal Lake in Srinagar | PTI

The residents of Dal Lake have urged the government not to press ahead with its plan to relocate them, taking into account their concerns like the loss of livelihood and ties with the lake.

The government plans to relocate the Dal dwellers and move away their houseboats to Doledum area as part a conservation plan conceived in the late 90s.

Some of the residents were shifted to Rakh-e-Arth in Srinagar a decade ago.

Most of them, who had made a living out of the lake’s produce like vegetables and had owned shikaras, not only lost touch with their roots but also suffered the loss of livelihood as other sources of earnings didn’t match up to the steady income they received while dwelling in the lake.

The lake dwellers and houseboat owners on Saturday held a meeting at Nehru Park and urged the government not to proceed with its plan in haste. They said they would resist the move, but would cooperate with the government if it listened to their concerns.

A houseboat owner and a key lake conservationist told THE WEEK that the government’s accusations of encroachments and polluting the lake by the dwellers were not true.

He said most pollution in the lake was caused by sewerage from neighbourhoods surrounding the lake. To buttress his claim he cited data collected by government agencies and NGOs according to which the pollution caused by the dwellers and houseboats is negligible.

“We will cooperate with the government and are ready to install sewage treatment plants in our houseboats to keep the lake clean,’’ he said.

He said the governments in the past had spent crores of rupees to clean the lake but failed to achieve the desired results.

“The lack of seriousness of the government can be gauged from the fact that it has failed to rehabilitate the first batch of people from Dal Lake to Rakh-e-Arth,” said Yaseen Tuman who runs a chain of houseboats. “We will wait for another month or so. If they are not properly rehabilitated, we will give ‘Back to Dal’ call to bring them back.”

The lake is home and a main source of livelihood to around 7,000 families for centuries. It has 700 houseboat and 2,700 shikaras.