India gets its road to Mandalay with Indo-Myanmar bus service 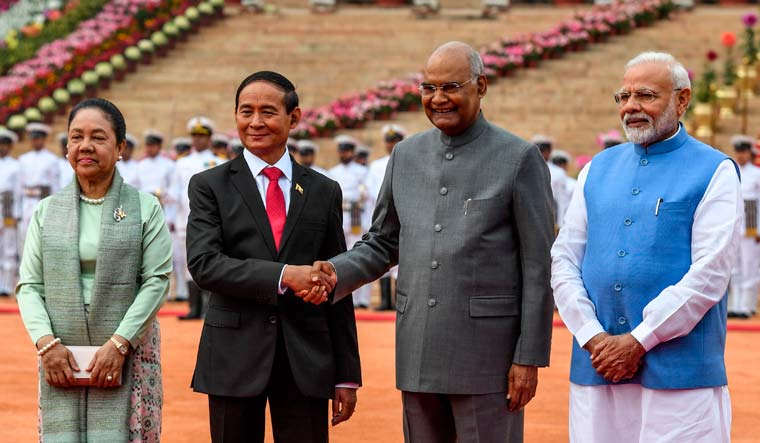 There will be a road to Mandalay this summer. On April 7, India and Myanmar are expected to begin the long awaited bus service between Imphal and Mandalay.

A key take-away from Myanmar President U Win Myint’s visit to India, the road will literally cement a closer relationship between the two countries. Connectivity is one the buzz words for Prime Minister Narendra Modi's government and the road, once started, will boost people-to-people relations between the two countries. The other infrastructure projects such as the Sittwe Port, the Kaladan Multi Modal Transit Transport Project and the Kalewa-Yagyi road section of the Trilateral Highway are all still works in progress.

In the past few years, Myanmar, has become an essential plank of the Neighbourhood First as well as Look East policies of India. To demonstrate its commitment, India has increased the allocation for these in the budget. In 2019, Myanmar had Rs 170 crore allocated to it—an over 50 per cent decrease from 2018. The 2020 budget, however, saw the country get Rs 300 crore.

The relationship has expanded as, against the backdrop of China playing a vital role in Myanmar, India chooses to focus on people-to-people relations. The joint statement between the two countries reflected this. The two sides agreed to establish “border haats, with a priority to carry out a pilot project, which was previously agreed by both sides in accordance with the MoU signed in 2012.''

These haats [markets] are to help emphasise the importance of promoting the well-being of the people in the remote areas across the borders of the two countries. India's offer to help the country by providing radiation machines to deal with cancer, too, is a step in this direction.

Going beyond just the haats, India has also demonstrated its friendship with Myanmar, by refusing to comment on the Rohingyas. Especially, at a time when Myanmar has been censured at the International Court of Justice. The court has ordered Myanmar to prevent genocide of the community and the country is facing increasing international isolation. Maldives recently hired noted human rights lawyer Amaal Clooney to argue the case before the ICJ.

India, however, has chosen diplomatic silence. And prefabricated houses for the Rakhine state. “India reiterated its commitment to support Myanmar’s efforts for promoting peace, stability and the socio-economic development in Rakhine State through the Rakhine State Development Programme,'' the joint statement said. “Myanmar appreciated India’s provision of 250 pre-fabricated houses and relief materials for displaced persons in northern Rakhine in 2019. Both sides agreed to expedite the implementation of a set of 12 projects under the second phase of the Rakhine State Development Programme and to further strengthen their development cooperation within the framework of High Impact Community Development Projects and Quick Impact Projects under the Mekong-Ganga Cooperation mechanism,'' it read.

India also “reaffirmed its support for the recent steps taken by the Government of Myanmar to address the challenges in Northern Rakhine,” the statement read. Caught between two neighbours Myanmar and Bangladesh, India has carefully tried to walk a tightrope. The joint statement is a testimony to India's keeping the balance. Expressing its support for the “bilateral agreements'' signed by the two country, India hoped the two would work together for the “voluntary, sustainable and speedy” repatriation of the displaced people in Cox Bazaar. This, of course, will be a long drawn-out affair.

In return for its sensitivity, the “Myanmar side thanked India for its understanding of the complexity of the issue”. A win for India.