What's for dinner? Here are the dishes on the menu for Donald Trump 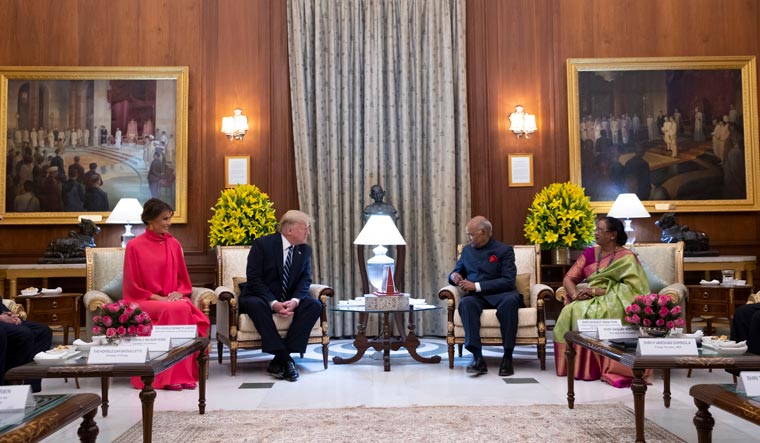 A spread of vegetarian and non-vegetarian delicacies have been carefully curated for the dinner hosted in honour of US President Donald Trump by President Ram Nath Kovind.

Of course, the famous Dal Raisina is on the menu. Other dishes include 'smoked orange peel penna cotta', 'lemon grass and coriander shorba', and aloo tikki chaat with palak papri'.

The main dishes would include 'dum gucchi matar', 'deg ki biryani', and assortment of Indian breads and 'mint raita'.

Now, the dessert. On the menu are 'hazelnut apple pie with salty caramel sauce', 'malpua rabri roll', and fresh fruits.

Delhi: Menu of the dinner banquet at Rashtrapati Bhavan hosted in the honour of US President Donald Trump. pic.twitter.com/qcnwzWkJDz

Trump, accompanied by US First Lady Melania Trump, was received by Kovind at the forecourt of majestic Rashtrapati Bhavan along with his wife Savita.

Later, the two presidents met for ceremonial talks during which Kovind said importance of the Indo-US relations could be gauged from the fact that a large number of people came to welcome him.

"The US is a valued friend and India is deeply committed to the strategic partnership between the two countries," Kovind said in his opening remarks.

The US president said the last two days have been "very productive".