Were those who were seated in the library stone-pelters or peaceful students? 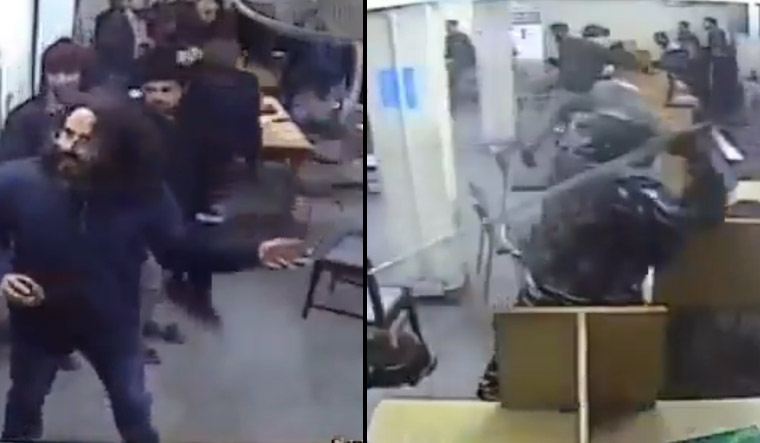 Screengrabs from two videos circulating on Sunday: the image on the left allegedly shows a person holding a stone or a brick after entering the library, the image on the right is from a clip showing uniformed personnel beating people seated at their desks in the library | Twitter

On December 15, Jamia Millia Islamia University turned into a battleground between protesters, students and police. Delhi police as well as paramilitary personnel entered the university on the grounds of nabbing ‘outsiders’ they said had entered to spread mischief in the aftermath of anti-CAA protests taking place nearby. Around 200 students were injured in the resultant chaos, which led many to blame the police for using excessive force.

In the report later prepared by Jamia, it was alleged that police entered both the old and new libraries, a charge the police have repeatedly denied.

Two months since the incident, however, multiple videos have emerged, purporting to show CCTV footage from a library in the university, where police and paramilitary personnel can be seen storming the premises and attacking students.

In the first video, released by the student and alumni body Jamia Coordination Committee, a 45-second clip shows several policemen in riot gear beating students who are seated at their tables in a room later identified as the Old Reading Hall.

The JCC said they received the video from anonymous sources. Jamia later issued a statement distancing themselves from the video, saying that it was not released by the university. The JCC was formed in the aftermath of the December 15 incident, in response to the claims of police brutality during the incident.

The video prompted condemnation of the police on social media, with Congress leader Priyanka Vadra Gandhi accusing the police of blindly assaulting students and of lying when they said that they did not enter the library.

However, one of the students can be seen running into the room and sitting down. BJP IT head Amit Malviya highlighted this, to say that the students were rioters who had used the library as shelter from the police.

- Students in library with ‘masks’
- Reading from shut books
- Looking anxiously towards the entrance rather than being relaxed and immersed in studies, which is what a library is meant for...
Anatomy of Jamia rioters who tried hiding in the library after a stone pelting session? pic.twitter.com/lgF8WnLVkP

“Good of Jamia rioters to self identify themselves. Agencies must use the video as evidence,” he tweeted.

Additional clips also purporting to be CCTV feeds of the library emerged later on Sunday, showing a group of people entering the library with stones in their hands and wearing masks.

In the second clip, running around 5.25 minutes, people are purportedly seen entering the university's library in a rush. Some have their face covered. As soon as they enter the library, those present inside the room can be seen pushing tables and chairs to block the main door. However, it does not have details of the timing and date of the incident.

This is another video outside #JAMIA library. Some persons are seen carrying stones in their hands. But despite that how can the policemen lathicharge on the other students as well who were unarmed and taking shelter of a room in the fear of police action. pic.twitter.com/63gnt4ipVf

In the third video, running into 2.13 minutes, people are seen in the gangway with some covering their faces, while at least two of them are carrying stones. The footage was captured roughly at around 6.04 pm on December 15.

The Delhi Police said they would investigate the videos as part of their probe into the incident.